Transformers Prime - Rage of the Dinobots #1 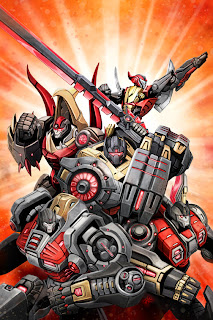 Stylistically, I was asked to use the Fall of Cybertron Dinobots, but add in some Transformers Prime aesthetics.  To me, that means the traditional G1 and Cybertron game look of 'stacked' metal, and the Prime style being 'wrapped' metal.  So I just made a few tweaks here and there, it was approved - so I was off and running. 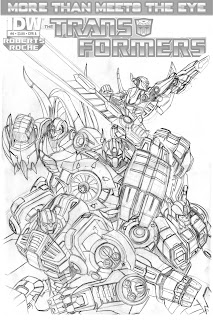 Here is the layout sketch, with a title treatment put in to make sure the composition fit.  Swoop need a few tweaks to get him to fit in the space better, though.  It was a tight fit to get everyone else in there - I'd call this a 'Bouquet of Dinobots.' 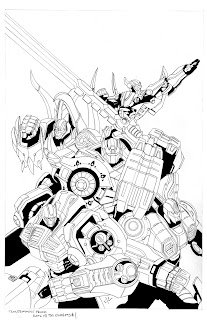 And this is the set up for final, half pencils, half inks.  This got scanned in, for digital paint for final.  The original art will be for sale, I'll be posting the originals in the Facebook Page Original Art Gallery sooner than later.

And the issue comes out in a few weeks!