Transformers Prime : Rage of the Dinobots #2 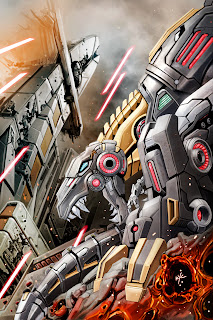 Number 2 in the series, I was asked to do a dino-mode Grimlock spotlight.  I did a number of thumbnail sketches, but John and I landed on this composition - it had a nice ying/yang balance to it, and it afforded the opportunity to feature a little bit of the worn torn Cybertron.  And I haven't done molten slag in a while, so here was my chance! 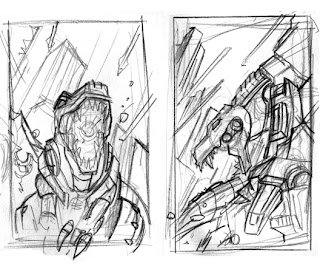 Here are couple of the thumbnails, the one we picked, and my second favorite.  Again, it was to feature the rage of Grimlock.  But, they already had a similar cover going with a like pose, so it was an easy decision to move forward with what became the final image. 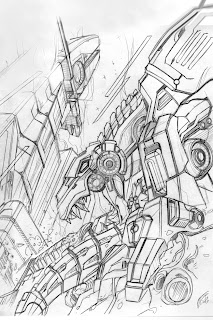 Here's the layout for approval.  Basically a blown up and redrawn from the thumbnail.  Finding some more details and adjusting the perspectives.  Once that's approved, it's on to the final, where I further clean up the lines and details, and get it ready to go digital. 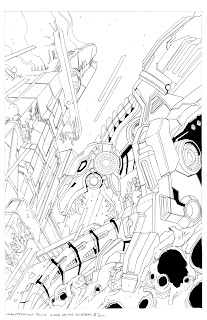 And there it is, ready to go to color.  This one will be out in December!