I want to work on The Black Hole remake!

It's been stated that the next property Tron Legacy director, Joseph Kosinski wants to take on is The Black Hole. And I'm all for that. A terribly weird Star Wars ripoff from 1979, that for some strange reason has remained in the hearts of tons of people (well, boys) ever since release. But I'm not here to debate the merits and legacy of the film, I'm here to update a character! 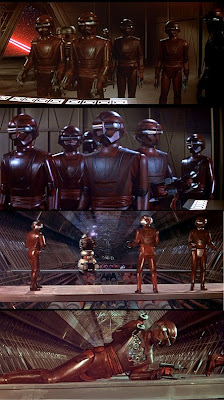 And his name is STAR. Now, the movie scenes I managed to capture that showed the full suits, are of the Sentries, but STAR was introduced as a Super Sentry, pretty much exactly the same as the others, but painted black, with a ring of red LED's on his chest plate.

As always, I start out with some thumbnails - I had a page going, but doing some work on another painting, I had some leftover black acrylic, so I blotted out another design, the second from the right, and that's the one that stuck with me.

I really liked that head from the second sketch on the left, kind of the sloped back Black Manta kind of helmet/mask, so I added that to the body I liked, and took it to a pencil drawing. 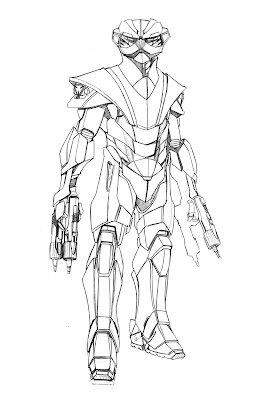 Now with the pencils pretty much set, it's ready to go into photoshop for block-in's, and I'll make adjustments as I go...
Posted by Ken Christiansen at 8:02 AM