Yep, I'm getting started early this year!  Still locking down details on my first con of 2012, but it looks to be a pretty sure - I'll make a formal announcement when everything is 100% confirmed, but I'll give you a hint...Yellow Brick Road.

Enough of this jibberjabber, and on to the robots!  Here's the thumbnail plans for the sketchbook and prints: 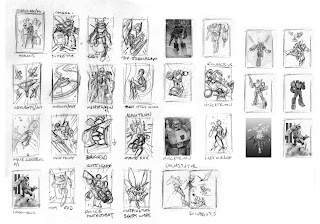 Jeez, that's a lotta stuff to do!  A few of last year's sketches that didn't make it in the 2011 book, and hopefully a couple of blueprints for 2013's print set.  The 2012 Prints will include the Tapes, Thundercracker and Skywarp - to round out the Seekers - Wheeljack, Sunstreaker, and Sideswipe.  Sunstreaker and Sideswipe will have a linking background, for anybody who wants to keep the twin's together.

I labeled what was actually going to be what the thumbnails will turn into, though all poses aren't set in stone, just yet.  But I am excited for the double page spread, Dinobots vs. Devastator, bottom right!
Posted by Ken Christiansen at 8:40 AM