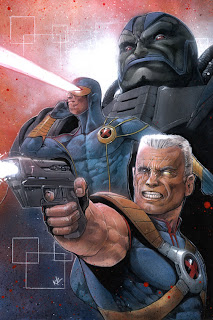 I'm pretty happy with this one overall - and I love that Cyclops, I want to do a painting of just him.   So I don't know if that means the Cable and Apocalypse are weaker then, making it a weak painting.  I still really like the composition, but now that it's done, I wonder if I should have spent time more defining how Apocalypse is being portrayed - he's not actually meant to be with them, but is he a spectral figure?  A background figure?  If so, he's too defined/rendered.

So here's what got sent to Marvel this week: 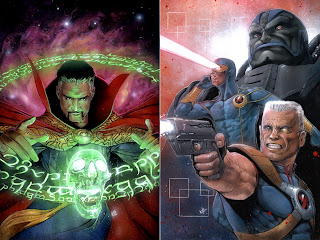 After scanning in the Strange painting, I went back and added some more glow, with white paint airbrushed on, and then gave it the gloss varnish.  It changed so much with those little tweaks, I had to rescan the image.

I got a response back from CB, saying the Strange one was the 'best one yet!' but I don't know what that means - I hope it signals he's passed it on to the editors, or at least Steve Wacker, who I had talked with at SDCC, weeks back.  Anyways, it's nice to have a guy like CB enthusiastic about your work!

I'm tentatively scheduled for a comic con in March, so my need to get going on my 2012 prints and sketchbook just kicked into high gear, coming three months earlier than I expected.  I may have to put aside my efforts to get into Marvel, (though I have high hopes these last two will hit it for me) and get going on making pictures of robots fighting each other.

Next week I'm out, but expect some Transformers sketches to be posted when I get back - got a lot of ideas to come up with, in a short amount of time!
Posted by Ken Christiansen at 8:53 AM

I have seen the latest movie, about the roots of magneto and professor x.