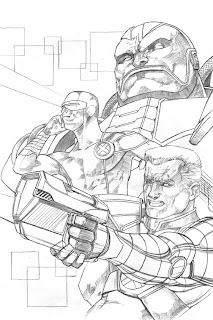 Strange and this one are going to Marvel for submission - they HAVE to be the best I can do at this moment with my painting.  Apocalypse looks pretty good, and I think Cyclops looks awesome.  Cable is jammed in there, in a pose I envisioned originally, but in actuality he looks contorted to fit the composition.  I drew, and re-drew the gun hand, the arm details - the angles never came out right ( I don't want the blast angles to be the same) so I finally faced facts, and decided to scrap that version of Cable.

Painting is the hard part for me, the drawing isn't - and if the fundamentals aren't there with a strong drawing and composition, the painting is going to fail.  I think the pre-Strange submissions suffered from that, and the White Queen painting is a transition from that older series of Avenger paintings. 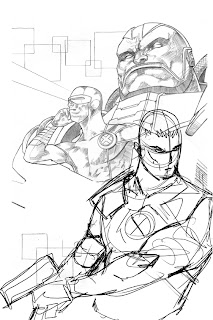 I cropped out the Cable, and did a few quick sketches in photoshop with the Cintiq - this one more suspense, and less action, and the second sketch got deleted, but it turned into this... 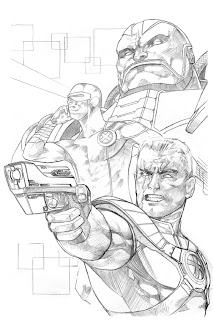 ...I decided to let go of trying to feature the cyber arm, and just get a cool pose in there that worked with the rest of the composition, and I think it came out pretty well.  I found the gun angle I was looking for, and the tone I was originally going for with the piece. 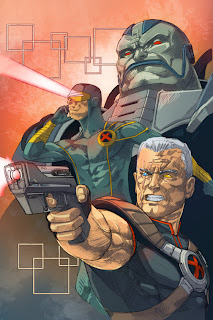 And finally, here's the color comp.  Expect some foreground paint spatter before all is said and done...
Posted by Ken Christiansen at 8:19 AM