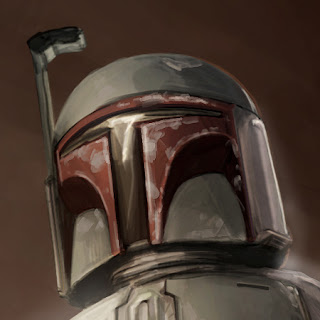 I don't want to stop the Star Wars fun just yet!  35 YEARS of this stuff - unbelievable.

OK, here's a step by step of this piece, featuring Boba Fett in the Mos Eisley Cantina.  I wasn't really sure want I wanted to do with this one, other than to have the classic entrance scene of a notorious gunslinger stepping into a bar, and technically frame it as a key frame image 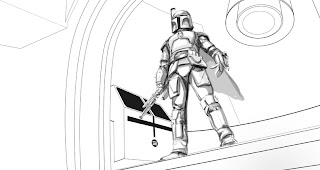 I gave it an up angle, so we wouldn't have the exact same shot we've seen for years, of Luke and 3PO stumbling around the entryway. 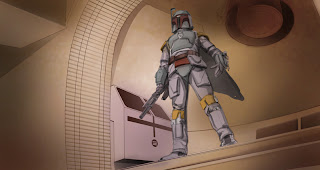 Once happy with the general set up, I add in all the flat colors, with an overlay of dark and light to begin finding the lighting and focal points. 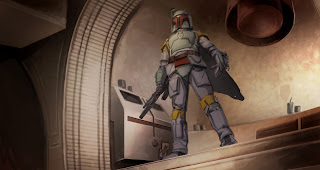 After I get the colors set, I began working out the details of the background, adding in textures, and additional objects - along with messing around with the focal points, seeing what works best.  But not going so far as to set any permanent tone before doing some work on Fett. 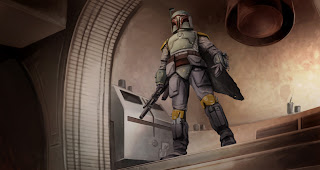 Happy with what I have going on in the background, I go back and work out the details on Fett, adjusting the colors and shading, but still using broad strokes for the details. 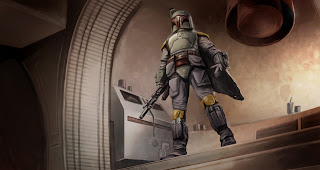 This is where I begin merging the two together, both with color tweaks, and adding more of the fine details. 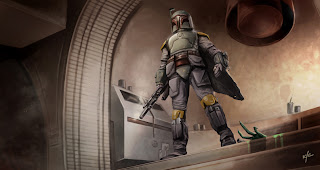 I was nearly finished, but felt it was lacking a little something, so I decided to change it from and entrance scene, to an 'after' scene.  Perhaps the bounty tried for an escape, but Fett gunned him down?  I added in a coin for him to toss to the bartender, echoing the 'Sorry about the mess." sequence with Han and Greedo in Star Wars.

A little gunsmoke, and some more atmosphere, and I called it done.

Posted by Ken Christiansen at 8:15 AM