If there was ever some concept art I did for Hasbro, Inc. that I've been wanting to post, this is it.  And I never thought I'd be able to, anytime soon. 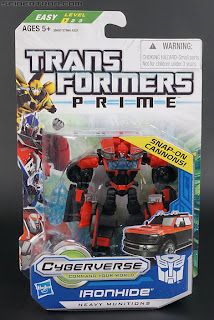 Mentioned before on the blog, I got to do some PRE-pre-production designs for Hasbro, Inc., doing some internal development  for, at the time, was called...TV Show.  At least, that's the title of the folder I had saved all that stuff into.  And like I said before, myself and other Hasbro freelance artists did different passes and versions of key characters, and all that was bundled up, probably along with 25 years of other Transformers art, and sent off to Hasbro Studios, and Jose Lopez, to create the final vision of the characters for the show.

So I wasn't part of any of the Hasbro Studios production, just the internal development with Hasbro, Inc.; I had moved on to other things, and like every one else, I didn't get to see final designs and clips until Comic Con, over a year later.  And while I was excited to see the show...I was pretty bummed there was no Ironhide.

Because I wanted a toy of him.  And really, that's a pretty significant motivating factor for me.  And I'm so happy that the strength of the design was well thought of enough to actually create a product from it!  I had seen the box art, and noticed that the artwork was very familiar, and on closer inspection, looked like cleaned up overlay versions of the concept art I had done. 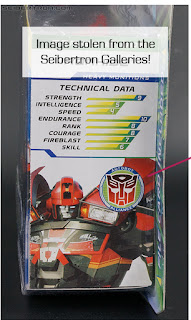 I got to check out the packaging at BotCon, and this image sealed it!  I begged and pleaded with the Powers at Hasbro to let me post the full frame art, and they let me!  So here we go: 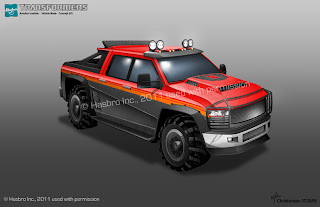 As always, the way my brain works, I want the vehicle completed first.  I want to see the vehicle cues, and get a sense of weight, that can be translated into robot form and characterization.  And colors of course.  I turned it in originally all red, (G1 all the way, baby!) but feedback suggested all black to match the current movie version.  I may have done all black with the yellow and red stripe, but then Archer suggested a two-tone look, and that sealed it!  What a great idea, and I have seen it used since on other versions of Ironhide. 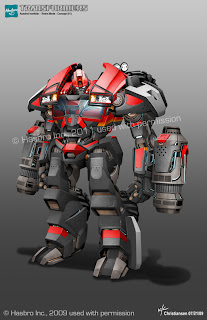 I'm super proud of this design - I think it captures G1, with Movie, and a sense of something new.  Of course, I had help, with Aaron Archer's input, and my man crush Eric Siebenaler at Hasbro was directing me on this project, he took the legs of one of my designs, and combined it with the torso of another drawing I'd done, and outlined the movie style gauntlet guns, and did a quick redesign of the gut, and gave it that cool shape where the Autobot emblem sits.  Then I took that image, and painted it out, and that's what you see above.

The product photos were taken from the Seibertron.com toy galleries.
Posted by Ken Christiansen at 9:48 AM

HeroicC300 from TFW here. Posted a link to this in the news forum.

Bummed that we're not getting this in-show, 'cuz it's AWESOME.

The two-tone truck idea has been seen one other place, and I think it originated from you, considering the dates involved: http://tfwiki.net/wiki/Image:DOTM-CannonForceIronhide.JPG

I wouldn't count out Ironhide just yet: there's probably still several seasons left before Prime packs it up, and Ironhide's getting a Deluxe too at some point, so who knows what the future holds.

I doubt it will be on the show - I don't think Hasbro would have released it as a figure if it had a chance to go through the proper production pipeline, and get Jose's final take on it, to get it show-ready.

I didn't realize the approval process was so strict. Still, who's to say it'll stay exactly the same in two, three years time? Things can change, especially if the show's supposed to run as long as rumored. I'm reminded of when Jose pretty much took over designing the characters for 'The Batman' from Jeff in the last season.

I don't know, just idle optimism I guess. You're certainly a better authority than me!

I love the toy and the concept. I hope we'll get to see him on the show

I want this toy, and I hope he makes the show. I love Ironhide. Might help make up for Cliffjumper, too.

If he makes it to the show I sincerely hope that Peter Culler reprises his old G1 voice for him!

G1 all the way baby!

In order to recuperate after the stresses of the destruction of Cybertron, Ironhide took some time out to vacation of the planet of Nebulos, where he inadvertently picked up the local accent (resembling Earthen Australian). His relaxation was brought to an end, however, when Unicron was awakened in Earth's core and threatened the safety of the whole planet.

Very Awesome work .I really love his look .I want to see him in action .

Thanks everybody, I'm glad he's been received so well!

Picked up this guy this weekend and he's so awesome, I wanted it ever since I saw the first toy image. The engineering on this thing amazes me. The concept art's not too shabby as well!

Didn't get a chance to go to Botcon this year, but I'll be at TFCon, I hope you'll be able to cross the border and see more fans!