Not that this is too much of a big reveal, as this image of Prima was published in last years' Transformers : Vault,* and has been scanned and posted across the internets.  But now I'm finally able to put it in my portfolio and talk about it a little bit.

This was a fun job!  I got to do final concept images for 11 of the 13 Primes, for Hasbro, Inc., creating updated source images.

I know Aaron and Rik (the Hasbro boys) have shown others I had worked on, like Leige Maximo, Vector Prime, etc. at conventions, but as far as I know, this is the only one out there.  Anyways, on to the image: 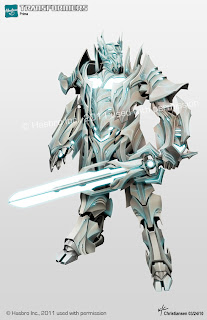 Again, working with Eric Siebenaler, I began a bunch of pencil sketches, but one clearly stood out, and it's basically a rough pencil version of what's above.  I themed him in a loose Samurai style, and reversed engineered details from Optimus Prime, to make that visual connection, as a descendant in the Prime Line.  He was nicknamed the Warrior of Light, so we went with a really ornate style, with the piped lighting over a quasi-mother of pearl armor.  The similar cues from Optimus only number a few, but are pretty overt - the facemask, helmet spikes, split chest 'windows', and I managed to put a G1 cue in there, the two bands over a triangle on the forearm.  The sword was a joint design effort, Eric had sketched out the two-bladed idea, with the Matrix in the hilt, so I basically redesigned it to fit the look of the character/armor.

So that's Prima.  And this round of Hasbro, Inc. images for Transformers.  But that doesn't mean the Hasbro fun is over - next week, concept art for Star Wars Fighter Pods!

*Sorry about the watermarks folks, it's the rules of the game for me to get this stuff on my site.
Posted by Ken Christiansen at 9:11 AM

Posted a link of TFW. Keep up the awesome work!

Is there a chance that you'll upload the other eleven designs you drew as well?

I wish I could, but it would have to be a situation just like this, where Hasbro decides when and where to reveal the characters.

Trust me, as soon as it's possible, I'll be posting any and all images. :)

I love the picture!!! I hope they use all the prime designs in the future either in the comic books or in the future TF movies....just worried about how the toy would look. Someone mentioned that he would look great as a statue...I agree. Look forward to the release of the other primes. Thanks!