So I wrapped up the big batch of vehicles for Eric, and begged him to let me take a crack at some characters.  But, he already had someone else working on it.  I begged again, and sent him this sketch.  (Bottom Left, along with a shot of the production figure) 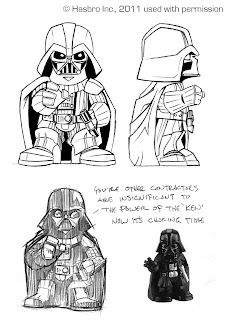 Well, it worked!  I got to take over a bunch of as yet uncompleted characters.  And, since he liked the Vader so much, he told me to throw it on the pile.  I think the final design has some of Erik's hand in it, overlayed tweaks for final.  It was still early enough in the process that overall character theme was still being figured out for production, along with what poses we could get away with, like the Stormie below: 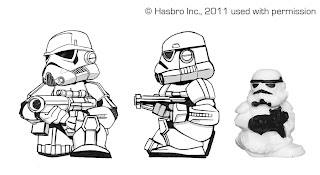 Would kneeling work?  Kinda?  I think the fig would pull it off better, with a couple more spots of black to sell it.  It was really important to keep the legs together, as it took some time to figure out how to accommodate the peg space under all the figures. 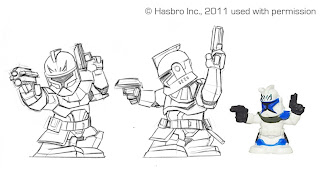 Captain Rex - a standout character from the Clone Wars.  I barely acknowledge anything collectible from non-Original Trilogy, (although I own the prequels, and watch every episode of the show!) but I do have the Clone War 3,3/4" figs of Rex and Cody.  They're pretty cool. 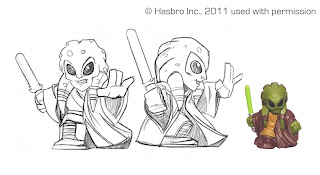 Kit Fisto - he's a charmer, until he went out like a punk in Revenge of the Sith.  This must be a RotS version, because of the cloak, but I posed him Arena Battle style from Attack of the Clones.  (I realize that might seem like a lot of prequel era knowledge - I may know more about it than I let on.) 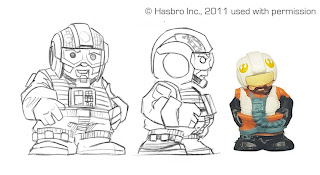 Jek Porkins - the fat X-Wing pilot?  Seriously?  Wow.  I laughed out loud when I saw him on the list, how awesome.  Strange that he makes the first wave, but I think it sets the tone of what to expect from this line.

Snowtroopers - !  To ride in the AT-AT, and take out Snowspeeders!  Here's a rough-to-cleanup-to-figure comparison. 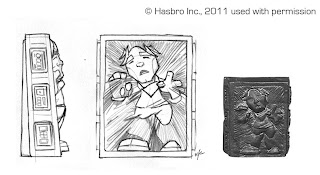 Han Solo in Carbonite - so sad.  My all time favorite figure of the line so far, I love it so much.

All right, that's it until the next waves hit this summer!

Posted by Ken Christiansen at 7:54 AM

Really cool stuff. Any news on when we may be seeing more?

Thanks! I have the next round of images in for review with Hasbro Legal, so as I get the green light - they go up. Hopefully very soon...