So, my man crush Eric Siebenaler, after ten years of working on the Transformers Brand, needed a change of pace.  He went over to the Star Wars team at Hasbro, and picked up the reins on a project, which turned out to be the Fighter Pods.  After getting a style set for the characters, and some ideas for the vehicles, he asked me to take over designs for the ships.

I often say that if you told the ten year old version of me that I'd be designing Transformers, my head would have exploded.  Now, if you told the 5 year old version of myself, that I'd be making Star Wars toys...well I just don't know what.  I probably would have just laughed and went back to playing.  And a year later I would mad with power, playing Star Wars Guys with my friends, dominating play patterns.

Anyways, on to the toys, here's some concept art for some of the currently released vehicles.  (And by the way, finally more coming in August!) 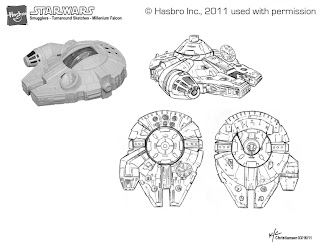 THE Millenium Falcon - Obviously, something changed.  This was very early in the process, so I'm not sure everything was figured out, in how to best orientate the pods to fit in the vehicles - the production version (image on the left, included for product examples) looks better, I think.  I took cues from the original Kenner mold of the Falcon, as far as ratios in sizing the vehicle features, cockpit, etc.  Eric had set the tone for vehicles with the smaller size clamshell version of the Falcon, so I could deviate a little more, so we didn't have just a bigger version of the same product. 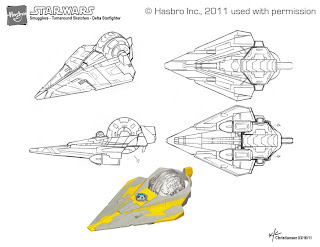 Jedi Starfighter - So this came out pretty close, didn't it?  Not too much to talk about, the style for this size was pretty much set, so I just had to figure out how to fit that pod in there.  Well, I guess it goes where the cockpit goes. 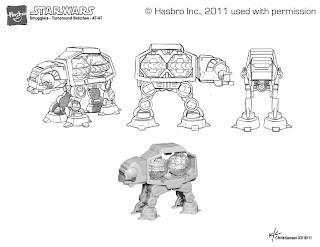 AT-AT - Hmm...I like my version a little better, (modeled after an attempt to make an even cuter version than the Galactic Heroes version of an AT-AT) but I suspect there were packaging and price point issues that kept the legs a little short, and the feet a little small.  It's still pretty fun to stomp on the little pod guys with, and you can't really go wrong with an AT-AT - it's a classic.  And it holds two pods! 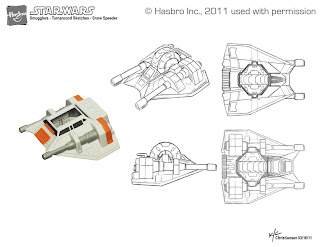 Rebel Snowspeeder - and of course, the great nemesis of the AT-AT, the mighty speeder of Hoth.  One of my all time favorite vehicles from the Empire Strikes Back, and one of my favorite toys from Kenner, and even currently, the newest 3 3/4 version that came out last year.  And now, this one.  I fly it around all the time.  C'mon Snowspeeder - let's go get some more coffee.  And then we fly down the hallway to the kitchen.  (Though to be honest, it now sits half the time, while TFP Soundwave and I get coffee.)  I'm 37 years old, so what?

On to the small size, (my favorite assignments for the vehicles) I'll call it the Clamshell Class: 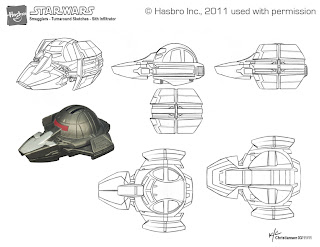 Sith Infiltrator (Really it's just Darth Maul's ship) - I always thought this was a cool prequel ship, and it was a lot of fun to try to come up with a 'cute' version.

And now I must stop abruptly, and wait until the next wave of vehicles come out in August.  I did see some new ones on display at Toy Fair, so I know I'll have more to show.

But it's not over - on Friday, I'll post some character designs...


Posted by Ken Christiansen at 9:24 AM

i like your in progress artwork & Sketches,it is very nice information,thanks for sharing these creative ideas.packaging supplier

Very cool. Just saw these the other day in the store. Congrats on snagging the gig. Very nice.