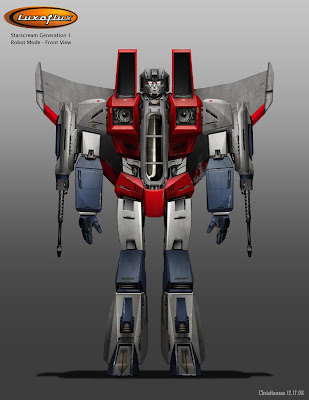 It's Starscream! So I was really happy about this guy, I thought he came out the best, sometimes the characters seem to transcend the almost clinical nature of these turnaround views, and still project some personality. Like I said before, I was asked to reference the MP versions (and annoyingly even the Revoltech versions) but aside from visible jointing and other small details like that, I kept it G1 toy and toon as much as possible.*

With the joints, which I don't think was built into the game versions, I at least intended to have the boxy look, but with sliding panels to accomodate range of motion. I.E., the shoulder would be capped by the top of the 'box,' but the cap would attached to the rotator, and slide into the recess of the side of the shoulder as the arm was raised. Make any sense? It's a simple engineering concept, like a breadbox or a rolltop desk. But everywhere around the major joints. Made out of armored metal. 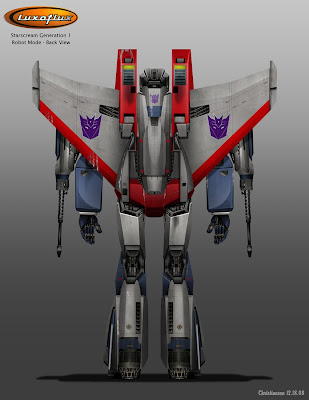 While trying to maintain the look, I knew I had some sacrifices to make, so I went with the idea of keeping the front true to the old designs as possible, and putting the functionality in the back, especially with the elbows and knees. So that's why you see more exposed gearing. 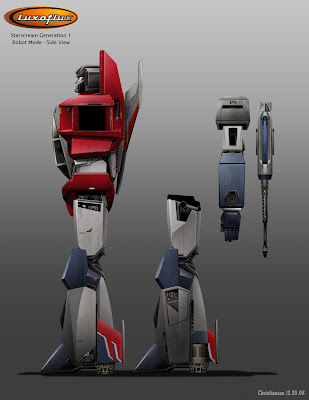 Again, the side view is more of a pickle to deal with, trying to reconcile the details from the front and back. I tried to keep it as true as possible, but I think a few changes had to happen to get things to line up.

Hopefully not too much of a big deal, because overall I thought he came out great...and I finally got to play him last night, and it was super fun! Using Megatron as the Special Ability weapon? Badass.

*I already saw on the boards someone dinged me for the orientation of the wing symbols! Like I said, I used a mix of G1 toy and toon to define this guy, the toon has upside down symbols, the toy didn't. Whether or not one version has lived on more than the other, I can't really say, but I can say I tried as hard as possible to stick to 1984 to a fault.

Of course, if someone really thinks this character is horrible and ruined because of this, please direct all blame to me. I can take it.
Posted by Ken Christiansen at 8:15 AM

Awesome design! If done like this, a G1 movie would work!!

Thanks Guido, I take that as high praise!

Knocked it out of the freakin' park, man!!! That is SUPER cool...

As for being able to handle crits, that's cool and fair enough, but if someone is going to let the orientation of an insignia get in the way of them enjoying something, that's not on you at all. That person can just balls up and deal with it...

This is what "modern" Transformers are supposed to look like!!!

So Starscream has full range of motion (along with the other G1 characters I assume), that pretty much debunks the concept that it could not be done in live action.

wow,you as fan art of the transformers?