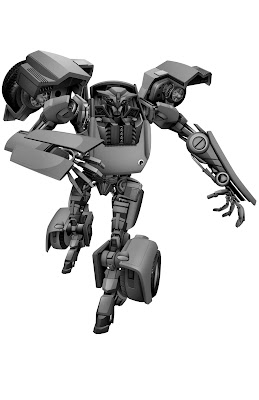 After finishing up the pencils and sending them off to Hasbro for approval, I got to work on the grayscale. I approached this one a little differently than the drones in the console game, which I had finished about six weeks before. I was ramping up to do those G1 illustrations, so I was able to use this as a test piece to see if this new technique would work; doing the whole thing in gray, and coloring afterwards.

Again, the details I had to work with from the toy photos were pretty minimal, so I used a lot of made up details to fill-in the gaps, and by adding some more mechanical aspects, to bring it more into the movie-verse. In hindsight, I could have put even more mechanical parts in, but I only had a two week turnaround for this guy, and a week of it was lost waiting for approval on the pencils.
Posted by Ken Christiansen at 8:12 AM