This is more of a story than an art post. So after a couple of weeks off, finally it was time to get started on the game. The deal had been made, Activision got the game, and Mr. Suarez asked me to be a contributor. Sweet!

There's a couple days in early January 2006, of fast and furiousness, a big all day summit meeting with all the developers for the various platforms, a couple of Hasbro guys, the Activision production team, and me. Then there was a trip to Amblin to read the script, and a trip to Bay's art production offices. And a bitchin' dinner at a place in Santa Monica.

This might not be the exact order of what happened, but this is for sure the first movie focused art I created. A special few were invited to Steven Spielberg's office, called Amblin on the Universal Lot, to read the final draft of the script. The main two producers for the old gen and next gen consoles, Suarez the executive producer from Activision, and crazily...me. Daniel had wanted me there to 'storyboard' the script. So we got put into a meeting room, which for anybody, would be the ULTIMATE den in anybody's home. It was glorious. The 'offices' of Amblin is actually a Spanish style mansion hidden behind thick trees, it really is a haven in every sense of the word. No Steven, but the coordinator gave us free lunch, and two hours to read the script. We each got a copy, with our individual names plastered watermark style on every page - there was no stealing this thing. The script was very close to what was shot, just less dumbass jokes, and a couple badass things that got left out. The best thing in the script was when Megatron finally got out of Hoover, and Starscream tells him that the cube got away, Megs bitchslaps him, before saying 'you've failed me yet again.' No slap in the movie though. One of many disappointments.

So while others read, and retyped/paraphrased the script, I drew like a muthaF'er for two hours...* 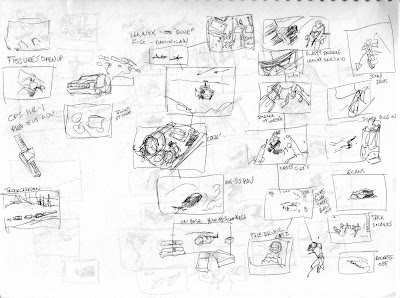 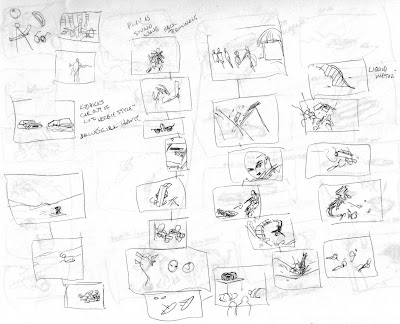 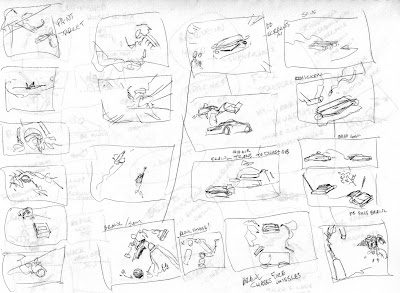 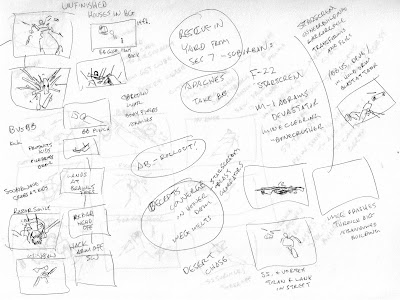 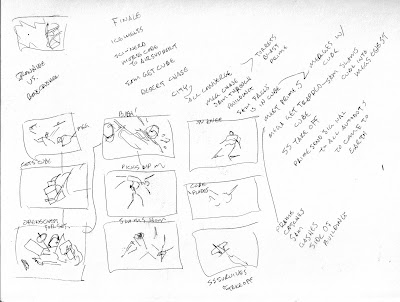 Notable - when Sam was falling off the building in the finale, time froze and he 'went' into the cube, and was given a history lesson by Sentinel Prime, about Cyberton's War, and the relationship with Prime and Megatron, and was given the clue to overcharge Megatron with the cube. So some of that was broken up and repurposed for the film, and the weird-o fantasy scene made it into the non-sensical sequel. You can see as I was running out of time...I wrote more than drew...

*The art wasn't posting with the correct size/proportions, so I broke it up and re-posted it.
Posted by Ken Christiansen at 8:43 AM

Very interesting "making of" ! It's a good way to know how an art direction of a big project begins.