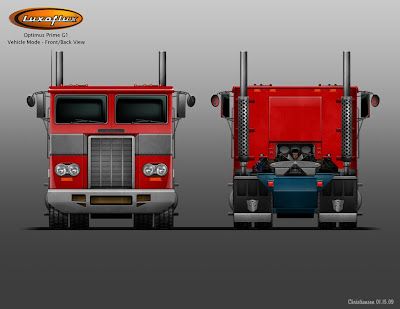 Prime Time! This was an awesome assignment. The real Prime, as a real truck, with all the real world detailing I could fit. Again, looking to the toon and toy for inspiration, but also having the benefits of the real truck to work from as well. I kept it as close as possible to the real truck, and added in the Prime details where needed, like the yellow vents, etc. Gave him some mudflaps, and other tiny details.

I left the cab and drive train pretty much alone in the side view, but added some mass to the back of the cab, and the hitch area got a lot of beefing up to account for the leg mass. Put some branding on the tires, 'Primetime Shipping Co., Cybertron Autobot 84,' and a ton of nicks and scratches to punch up the battle weary warrior look.

Of course, in the game, there's no trailer, but I had blocked it out for approval before I found out. So after I was done with the project, I finished it for free - just in case they found they could use it. I couldn't leave him unfinished, and if anything, it's good for the portfolio!
Posted by Ken Christiansen at 8:37 AM

It would have been cool to see the trailer in the game.

The thing is, how could it have been used in the game?

It wouldn't work in this particular game, and the usage of this character. This is just an add-on character, that's being plugged into a game engine that doesn't support Prime with his trailer.

Obviously in different circumstances it could be used in a game, but I think even in the nature of a third person game experience with such dynamic camera movement, it would be tough to pull off.

In the TF game though, the camera snaps back to rear position when you're in vehicle mode, and I think when you transform, the trailer could just drop off screen, reduce itself in the distance, like how it was handled in the toon.

I think anything can be done, it's only a matter if the effects of the animations and memory usages are derogatory to the gameplay, sometime things that can be done aren't worth it, because it hinders the game experience.

Wow, with an Trailer he would probably be Demolisher or even Devastator sized.