I had to make a few changes. They wanted to see Bumblebee as a bot, not a vehicle, so he took Grimlock's spot and I slotted in Prowl in the vacant vehicle spot. I figured it would be cool to have the emergency vehicles with the light bars all glowing. Also, a note I got back...'Uh, Spike doesn't wear the hard hat in our series...he's like a SEAL now.' So I ran out* and got the first trade for the ALL HAIL MEGATRON series for Spike reference, drawn by Guido Guidi.

So, Guido, that's my version of your Spike in the image! 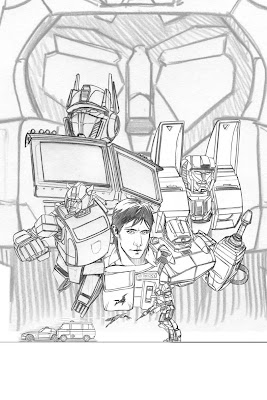 So after I submitted the thumbnails, and got feedback, I went ahead with the layouts. I was pretty firm on the composition, but still had doubts about the Megatron, and felt the eyes in the background was just too close to Darth Maul. I really liked the profile of Megatron, so I did these comps, one in the direction IDW wanted, and the way I felt would work better. 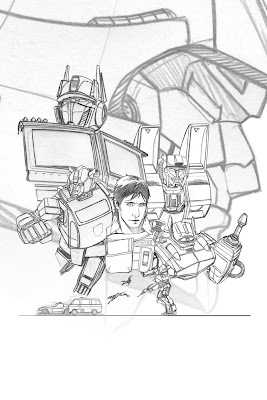 The sketch that had the original profile wasn't very strong, so I had to redo it, in a more compelling image. I think it made a better impression with this concept's iteration, and Andy was really cool about it, and agreed to let me move forward with this. 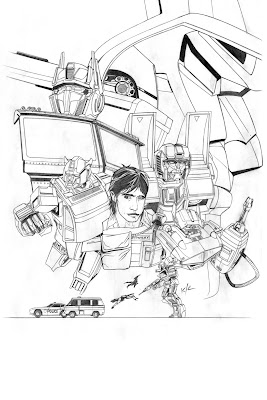 And this is the final pencils for the image.

*I know I claim to be a massive Transformers fan, but I admit to not following any particular comic series from IDW. Not that I never picked up any, I got some Milne comics because he's drawn some of my original characters, and others, like Spotlights, but I could never figure out where an ongoing series started or what. So it was kind of funny when Andy solved the mystery for me, and said that stuff hadn't really existed for them, that's the point to this Continuum book, to kick off the new ongoing series.
Posted by Ken Christiansen at 9:03 AM