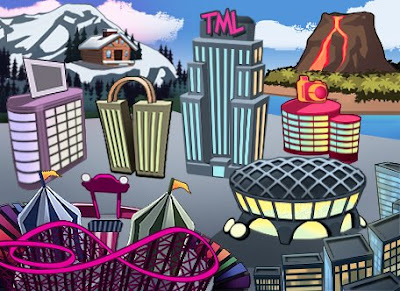 OK. So I turned in that week's worth of work, the color boards, and was done. Then a couple weeks later they asked me to do some placeholders, and a concept for a world map to select levels and options.

Here's the world map, it's about 3/4 done, got all the buildings designed, levels and other option zones...I left it all blocked in and then it was Xmas 07 break time, I was going to come back and finish it off, kind of tie it all together, lighting, perspective, etc. Then I got back from break, and the game was completely different, and this whole approach to starting the game was obsolete.

These were some options for a temp title screen, no colors or anything were defined yet...I still wasn't to sure if I was the guy or not to define these things, or just making really quick place holders for them, so it wasn't just white text on a black screen. 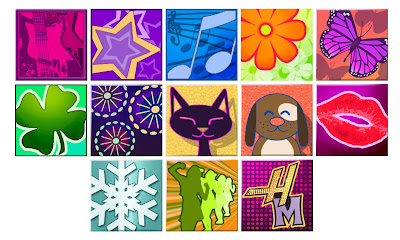 There was some attempt at a WiFi option, here a some concepts for personal icons...again no direction or design - just do. Now these next two are from the third pass at the HUD graphic design, after I figured out I was actually the guy defining the graphics, so I took a little more care in the designs, along with feedback and direction from Diz and the developer. I include these in the 'old' game designs because the function was the same, it was still a picture taking game, just with entirely different goals and game engine...so functionally it's the same, just the little icons and the space definitions got changed around - the layout is still pretty close to the original. 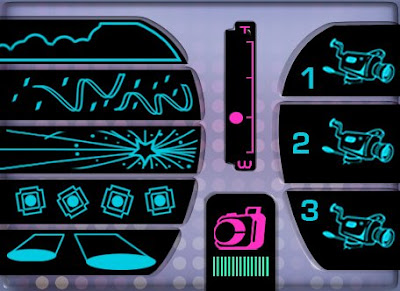 I think the original graphics and colors all had a pass with the elements that made up the title screen placeholders...
Posted by Ken Christiansen at 8:22 AM