So I've worked a lot on Transformers over the last 2-3 years. As of May '09 I will have created and published 20 characters for the movie universe. It's been awesome to see toys in stores, and read comics with my guys a part of the stories. My credits are buried as a contracted concept artist, so I'm going to try to push myself a bit more to the forefront. Not really so much to be famous, but to get more work, more easily. I've been able to work in my PJ's for four years now, and it's been great, but I need to expand out of video games.

I've been URGED by a friend of mine to submit stuff to IDW, so now that I have some time coming up, and I'm in the zone on this particular style, I'm going to try to crank out some cover illustrations in the G1 style...I decided to do three each of Autobots and Decepticons. Nothing too obscure, just the top three, Prime, Bumblebee, and Jazz. Then Megatron, Soundwave, and Starscream.

Here are some sketched out thumbnails of the Autobots... 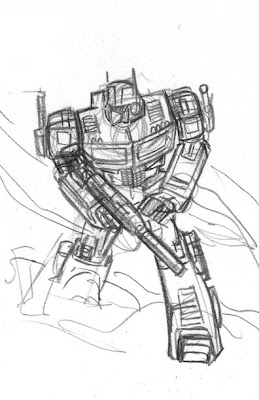 Our manbot Prime, standing amidst a cratered battlefield. 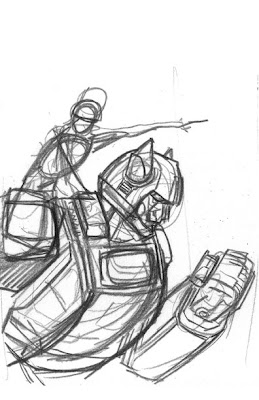 Bumblebee and Spike. Mostly to get the bad taste of Shia LaDouche out of my mouth. Think that wimp could pull off a hardhat? 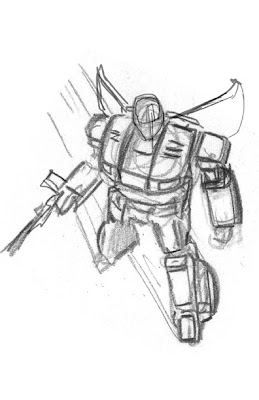 Jazz. More bad taste...his characterization in the movie was an embarassment to all. And to take a character from a Porsche to a $15K POS Solstice? Jazz, I will make you cool again.

Not an MTV Cliche.
Posted by Ken Christiansen at 8:48 AM