Oh man, that's a lot of side views. So I submitted black, becasue that's what I thought they wanted, maybe they saw it was too close to F&F, or they had something else in mind all along, so they asked for orange - which again, is a little played, if anybody is familiar with the Hazzard Boys.

So I did some graphic tests, and we settled on the basic striping. Which I was fine with, until they wanted the lime green. It was technically available for this car, but the combination of green and black stripes is too close to a 'Cuda - which is one of the alternate cars I suggested.

Then they had me jack up the back - I did it subtlety, as if I installed bigger leaf springs, but they pushed for more. And I think it's a little ridiculous looking in the final version. That final version also includes the now-ever-present legal revisions. 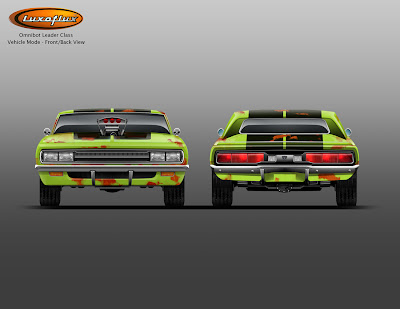 This is the original view in green, with lights open, along with the rusting patterns and primer spots. 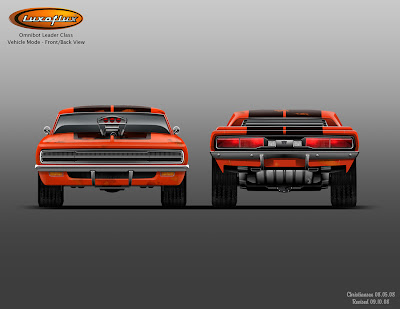 This is the jacked up view, along with the revisions.

The transformation sequence.
Posted by Ken Christiansen at 7:40 AM

Ugh, it looks so horrible jacked up like that. Makes me think of bad "Gangksta" cars...