So after I went back in and resketched the assignment, these were the two faves of the group. I redrew them, and threw down some tone - originally there was going to be one per faction, but they were worried that they didn't have time/memory/budget to get it all done, and were trying to figure out a solution. I said...what about one with blue, and one with red? 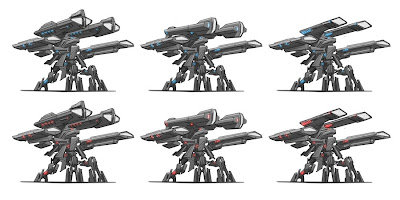 So after that discussion, Luxo chose the four barrel guy, but had me do a few variations, along with my coloring idea illustrated as well.
Posted by Ken Christiansen at 8:35 AM