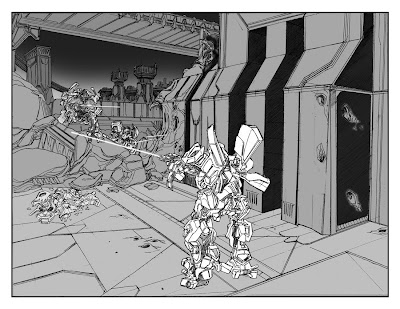 Here are a couple development drawings for Cybertron that have gone wrong. After doing those fast Sharpie sketches, they want me to dive right into some final art. I was reluctant, but gave it a try. Doing characters based off sketches isn't too hard, but creating a complete world takes a bit more time than a half day of sketching. The top one is an in-game shot, and below... 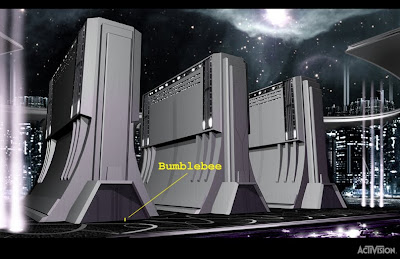 ...is a rough block-in for a world key-frame. Pretty much flat shapes, and some real-world cityscapes thrown in to set the lighting tone. Then they wanted me to put Bumblebee in there for 'action.' So I did. And then gave up. I felt we were skipping too may steps to get to a satisfying set of images, and I asked for a few days more of development.

So I went back to the drawing board and decided to start on key areas, rather than a whole landscape, later I could go back and cherry pick all these ideas for full images. I started with a bridge idea, an semi-homage to the first scene of the first episode of the G1 series. Just really trying to find shapes and elements, how things might be constructed or overlayed atop other structures. 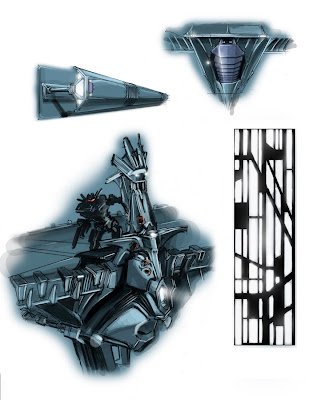 I can't find just the pencils (because these were colored later) but I had done these at the same time, to illustrate the developer-favorite-fill-arts of vents, pipes, and opaque windows...just to get them off the more conventional takes on those types of things, common in game environments. And then the bottom left was kind of a test color, in between location sketches...
Posted by Ken Christiansen at 8:17 AM