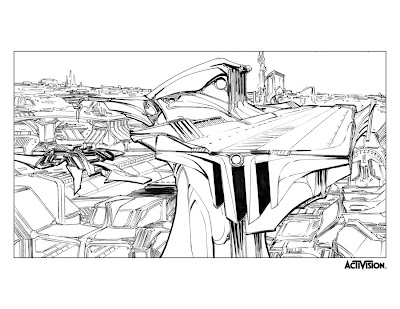 Here's a couple Decepticon specific areas...first, a landing platform. I guess the inspiration was a variation of a aircraft carrier, offset to the side, and placed stories up in the air. 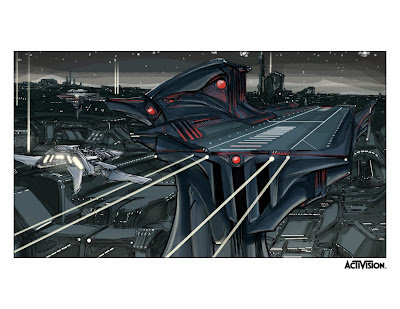 I also used this idea to further push the concept of a lit grid to stand in for 'streets' to help guide traffic patterns, in the good times at least. At war time, maybe just used as landing signals? The craft/robot would land, transform, and take the elevator located in the center of the structure.

And this is a concept for the Decepticon Headquarters, or at least the lair of Megatron, an outcropping connected to the larger structure, which included the high above landing platform.

Someone visiting would be very exposed down the long ramp, with sentry emplacements on either side - it would be a very daunting walk down to visit ol' Megs...

And so that's it for Cybertron. All told, this was a very fast and furious four days of work, to get this all together, and I had received just a few notes of feedback from Hasbro to push the craziness of the background skylines a bit more when I did the finals...but then the level got canceled, and that was that.
Posted by Ken Christiansen at 8:21 AM