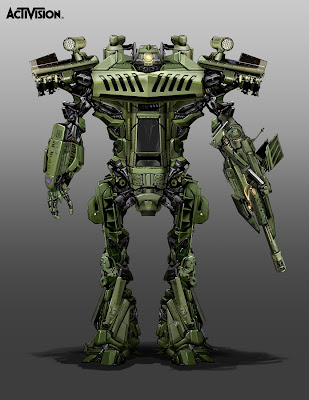 Robot mode for Shockwave. Can you tell a design difference between this guy and the drones? I'm fully loaded with movie content at this point, so it was much easier to match characters, AND keep the design directive within my own context of staying faithful to the G1 designs. So basically I threw in the two vehicle/alt modes, the style of the movie, and the silhouette of G1 Shockwave, all into a pot, stirred it up, and came out with this.

My main goal was to have the complexity of the fantastic artwork from the movie, but have absolutely no confusion as to who the character was. A fan should be able to look at this design, and immediately say 'Shockwave!' Unlike some of those movie guys...;) 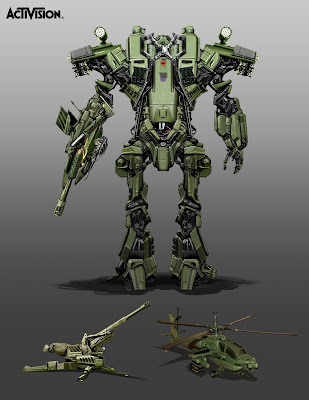 Other than the previously mentioned poor turnaround posing of this character, (which lead to less than great animations) I'm extremely happy with this design, but I do think I failed with the solution to the blades. I should have just bit the bullet and made them like Blackout (still called Vortex at this point!) because those blades came out great in the movie. I was trying to do something different, and keep the blades hidden from the front view to preserve the G1 framing...oh well. Maybe I'll get another crack at him some day, or more fun, an actual figure? One can wish...

And here are the color variations, the intended Military Green, the Government Black, and the Generation One Purple.

Now, how to make this guy transform into three different forms...?
Posted by Ken Christiansen at 8:11 AM

The design is good. You're right, the blades do pose something of a problem, but he's still impressive. I like the loyalty that comes with the purple color variation, but then again, why would a helicoptor be purple? So yea, for the most part, excellent job.