OK. Jump into the Way Back Machine to December, 2005. I had just spent the fall freelancing for Activision, helping them with the pitch to Dreamworks to get the next slew of animated movies locked down, working on Monsters vs. Aliens, Madagascar 2, Shrek Racing, How to Train a Dragon, and development for the Golden Compass. So I was nearing the end of Compass, and I got asked if I liked Transformers. Oh man.

I knew there was a lot of behind the scenes stuff trying to get a movie made, but I didn't know Spielberg was involved, or Bay was already locked down as director, or that production had finally actually started.

So I went to a meeting, and met with the team that was doing the development demo to try and get the game, and we discussed some game mechanics to get started. No one knew anything about the movie yet, so we kept it simple, and just created characters and worlds based on G1 reference. So simple combat story boards got drawn up, by me, featuring a land/air fight between Optimus and Starscream.

You can see an idea for transforming into combat was an idea that was intended waaaay back, unfortunately, Travelers Tales in the end couldn't pull it off - like the studs at Luxoflux could for the second game!

At the time, Megatron was rumored to be a tank, so we had a simple story written up, that I story boarded, featuring Prime vs. Megatron. 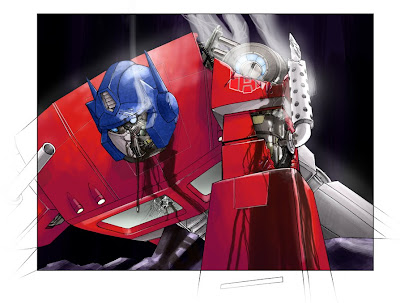 One last thing, they liked that last frame from the Meg vs. Prime sequence, and asked me to expanded to show Robot Gore...a take on battle damage.

Then I went on Christmas Break, and hoped they landed to project, for me to get started on in the new year...
Posted by Ken Christiansen at 8:37 AM