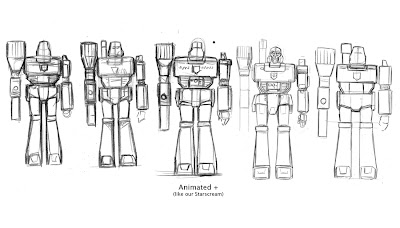 Megatron! As I did before, I started with the toon silhouette to define the shape, using both the show, and the Ark style guide. I did some slight variations, and settled on a similar take to the Starscream, Toon, plus a little more. After that is defined, I look to the toy for the primary details, and then fill in additional details and jointing from there. 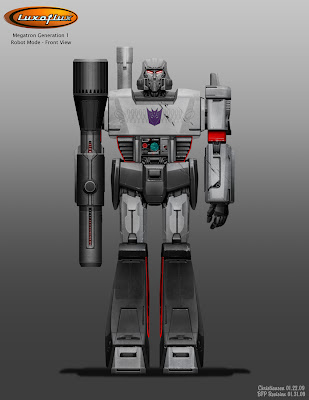 Along with the G1 reference, I also grabbed some pics of an actual Walther P-38 gun, to help define some of the curvature and industrial design, and add a little real world nuance. The face, along with Starscream, is again broken up against the toon definitions - I went with the idea of how they animate puppet animatronics, with around six or eight pull points around the mouth, orientated in different angles, up into the cheeks, or along the jaw line. They seem to get a pretty good range of motion with that technique, so I thought (at least hypothetically) that it could apply here as well. 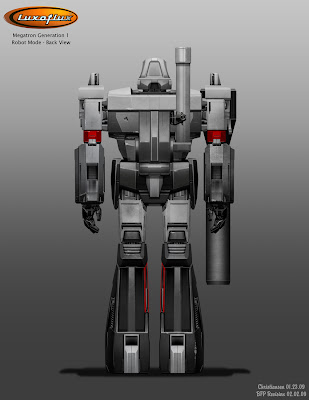 And like before, I tried to stay true in the front, and put all the exposed parts in the back. I added in some extra details to the back, just to punch him up a bit more, and give him the details that Starscram had. My plan was to do Starscream or Prime first, to set the standard, because I knew Megatron would need some help in the detail department. 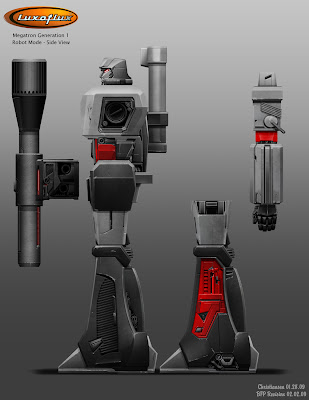 This was one of the more successful side views, again because the simplicity of the design, it was easy to match up the lines from front to back. I tried to keep the complex detail contained to ease the creation of the side view. Of course, the brilliant original design helped a lot too!

As far as the game goes, I see he's a little puffier than this submission, which looks good on it's own, but I wanted to give the old school fans something original first, before getting away from that concept, and 'improving' it. Who knows, this could have been the only opportunity to do this, and as an insane G1 fan, I wanted to do something I wanted to see!

And that's it for Megatron, at the time, I was not asked to do the gun version. They had no idea how to translate that transformation to the game with the engine they had. Had I known about special abilities, I would have suggested it for Starscream, but it looks like they were right on it, and that's how the gun mode appears in the game, and that's excellent. And the playable Megatron has a hover/flight mode as his Transform mode, and that's excellent too.
Posted by Ken Christiansen at 8:34 AM