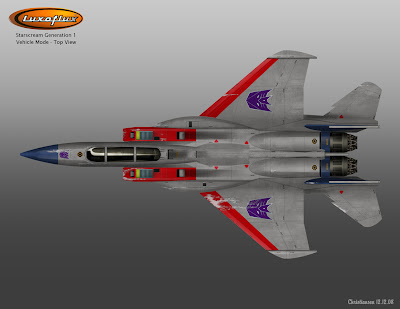 Vehicle mode for Starscream. This was a joy to do. Aside from the scrapes (originally I turned him in wothout, but Luxo requested it) I thought it was great to see a fairly real world interpretation of the Transformers F-15. The MP toy is very close, so my interpretation is a mix of that and the real jet.

It's tough to pull off the bright, primary colors in a real world setting, so I dropped the saturation down, and pushed the textures to bring it a bit more into reality. 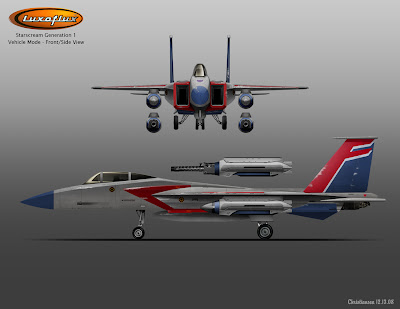 Same with the side view, but I deviated a bit from the MP toy, and made it more like the G1 figure, in regards to the feet. Aerodynamically, it's probably terrible...but this is Starscream! He can fly faster than anybody else!

I did two versions of the gun/null ray. The G1 toy, with the firing missile caps, and the toon verision, with the long barrels. I made them .50 cal barrels for the jet mode, but they transform into the more stylistic blasters in robot mode. 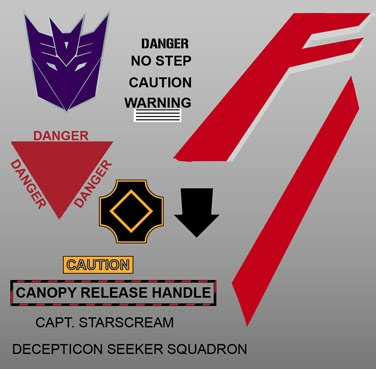 This is just a 'sticker sheet' of graphics for the Luxo guys to just for model textures. A little more GI Joe than Transformers, but it gets the job done!
Posted by Ken Christiansen at 8:47 AM

Wow, awesome work Ken, I spent the whole day pretty much looking at your whole blog full of amazing art :) You have some awesome artwork and its very inspirational. I love seeing your rough concept work and then you bringing that work to a Finished Clean Professional Look. (How did you get the final to look so Clean and Professional?) Fantastic! Thanks for sharing your artwork with us and thanks for the hard work you put in those Transformers designs. Looking forward to seeing more :)

I use a lot of selections to clean up the edges, mostly setting them up with the Path tool.