My first comic cover! Coming out in November. Here's the beginnings:

Andy Schmidt (also the writer of this book) at IDW said he wanted an 'epic' cover, in the style of Drew Struzan. I've had the good fortune to meet Drew a couple times, and buy some of his incredible artwork, so when Andy asked if I was familiar with his work - I was on board in a flash!

Drew is the King of Composition, so when I got my character list, I got started with these thumbnails. Prime, Megatron, Shockwave, Bumblebee, Ratchet, Starscream, Soundwave, Grimlock, and Spike were the characters I could choose from. 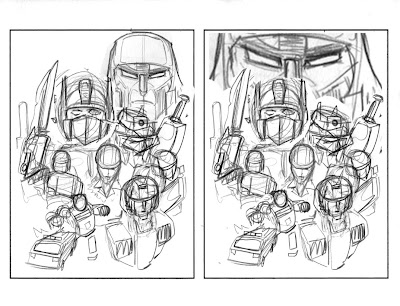 This is the first attempt, trying to get them all in there. Pretty quickly I got stuck on the idea to make Spike the central focus - since I was a kid, I viewed Spike as the audience 'connection' to the bots and their world. It was looking a little jumbled, so I pulled Megs out and made him more looming. Quickly I realized this was Darth Maul from the Phantom Menace poster - I wanted to emulate Drew, not copy him! 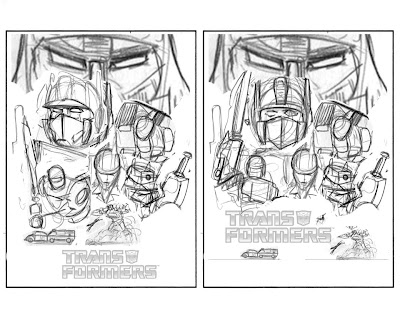 These are further explorations, breaking up the pile of heads that made up the first two ideas. One of the things I love about Drew's work is that sometimes he manages to tell a little story within the poster, so I got the idea of taking some of the characters, and making a little scene out of it. I sketched in Soundwave launching Lazerbeak and Ravage out after a speeding away Ratchet and Bumblebee. That also gave me room to expand the other characters past just head and shoulders, and open up the composition a bit more. 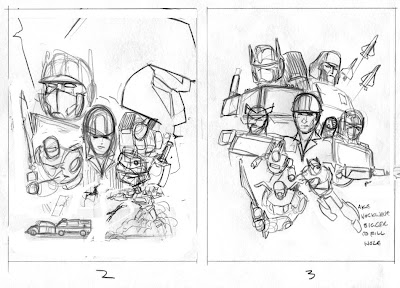 So the content was starting to fall into place, but that Ep1 Maul/Megatron was bugging me, so I did some alternatives, and landed on the idea for the profile of Megatron, rather than the looming eyes. Both distancing itself from a Drew rip-off composition, and actually creating more room to fit logos and other cover text that wasn't finalized, but need to be taken into consideration.

The other one was just simply another idea. I fancied the notion of the streaking Seekers in formation, but Starscream is pretty pivotal - I figured he would probably need to take a bigger role in the image.

So these got sent to IDW, to get feedback on a final layout...
Posted by Ken Christiansen at 7:50 AM