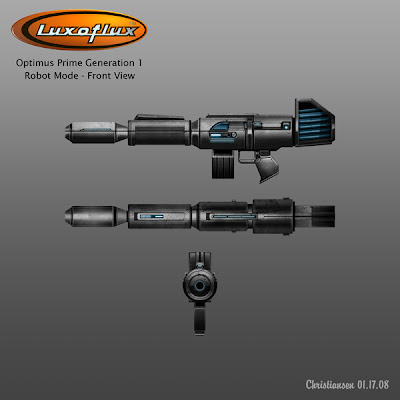 I forgot to add this to yesterday's post! The Gun of Prime. Same idea, traditional silhouette, with filled in details.

And that's it! You have seen just about all I contributed to the Revenge of the Fallen Game, done by Luxoflux. I know they have their system of development, but Activision had me work on the first game, and was keen to have me back for the second, and happily Luxoflux agreed to work with me to create all of these characters. I'm pretty proud of the overall work I did, and I think they made an outstanding game - I've played it all summer!

Primarily I worked with Justin Thomas and Joby Otero for the art designs, with Chris Tremmel contributing with the game design ideas to help form those concepts. And the producers I worked with, Brian, Marc, and Adrian helping me with schedule, paperwork, and legal design battles. They did a great job, and I wish to thank all of them.

And mostly I want to thank Daniel Suarez, Executive Producer at Activision, (responsible for the TF titles, plus other badass titles like the Call of Duty series) who has brought me into the Transformers universe, by asking me to do some storyboards way back in 2005, to pitch for rights to the first movie game - it has spiraled out of control ever since! And to extend my appreciation for having me come back for the sequels, and helping out with other Transformers titles and internal pitches for them.

I would love to thank you for all the hard work youve put into the game.

If you got the chance to work on another transformers game or download patch, would you do it?

Thanks very much - and when the next game opportunity comes around, I hope that I get invited back again.

Bravo, Ken!!! This has been AMAZING... I've looked forward to each of your daily posts on this!!

I'm gonna be sad to no longer see the transformer updates.
I've enjoyed them a bunch.

Don't be sad, Beau. I still have to post the PSP Dead End illustration development, and the stuff for my IDW cover. And since I'm double-booked right now, I'm not doing any after hours work to post, so I'll probably dig out the archived Transformers the Game development stuff too!