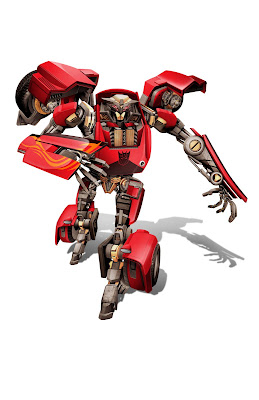 And here he is for final. I had conflicting reference for the final paint job, but I guess it's a departure from the actual toy after all, so not too big of a deal. I pretty much stayed with the toy detailing, but you can see where I filled in and added the car parts, here and there.

That back leg still looks a little wonky to me, but in the overall impact of the image, it's probably fine...but still, it bugs me. I struggled with it in the pencils, and you can see that the problems carried through - that was a pretty valuable lesson to me, to really put all the work in the pencils, and even then, it's ok to abandon that if it's not working, and start again from scratch. It's a lesson I still need reminding of, every once in a while. 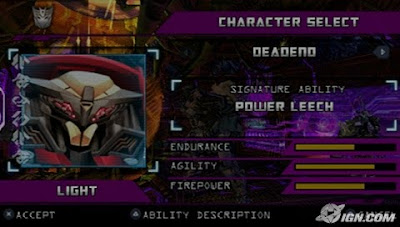 As far as how he appears in the game - I don't have a PSP, but here's a character select screen shot from IGN, that just shows his head and shoulder area. Maybe that's all they used? Well, here's the rest of him, to you PSP players out there that have the game, and maybe haven't seen the full shot.
Posted by Ken Christiansen at 8:00 AM