The development of Prime was not as satisfying as Starscream, or even Megatron. I love the Starscream, and the differences of my Megatron, and the one that appears in the game aren't too drastic, but...Prime in the game is way too oversized, and not in a good way. Instead of coming across big and burly, which I think was the intention, he looks bloated with steroids. Instead of being ripped and huge like a pro wrestler, he looks puffy like home run 'King' Barry Bonds. 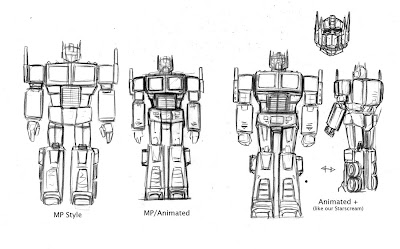 Again, trying to be faithful, the dotted sketch is the one I was wanting to go for...

...and this the one that we ended up with, after some arguments and revisions. It's just misproportioned, and I bummed with this is the representation. I had to really push the MP style, and that b.s. Revoltech toy, whereas I've said before, G1 toy and toon was my personal priority to draw reference from. That aside, and talk about the actual image, again I tried to keep the traditional transformation intact. 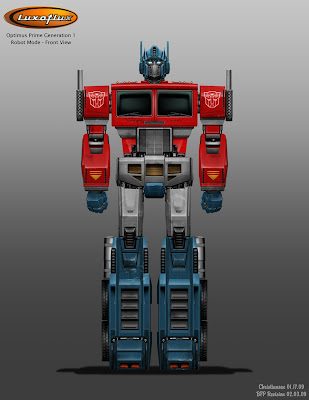 This is a revised version of what I had to turn in for final. The Transformation sequence shows that actual submission, but I went back and revised the design as best I could without totally redoing it. I gave him a longer torso, and slimmed and lengthened the upper legs, rescaled the head, and slimmed down and reduced the arms, trying to bring it all back to the origins. I just don't like the one I had to do, so this is the version that goes in the portfolio. The design pretty much follows the joint details of the MP toy, hydraulics and fairly exposed pivot points. 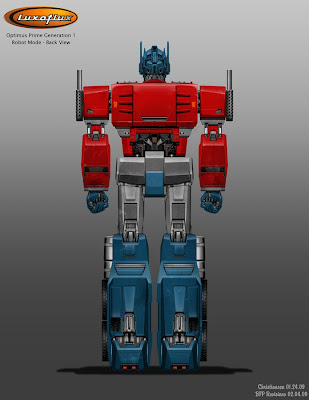 The back is a bit of a departure, but in keeping with the simplicity of the G1 transformation, I left the truck elements faily intact where I could, and the back reflects that in the lower lumbar area, and the hope was that it gave a bigger range of motion in the waist. 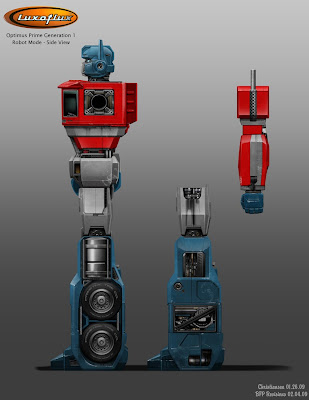 One of the things that kills me in that game is how far and peaked out the chest is, I reduced it back to keep the peak, but lose that massive overhang that somehow exists. Everything else is the same attempt to line up details in the side view, and fill in the gaps. You can see the socket for the shoulder, and all the joint details - that's all missing from the game. I don't know, but it could be the oversized shoulders that clip in and out of the body model that would have obscured it anyways, but whatever. 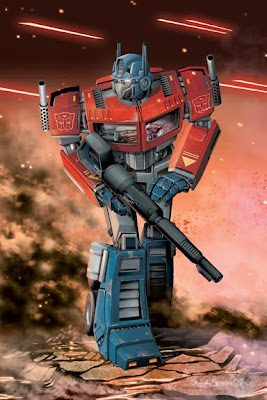 I was so burned about that Prime being the representation of me, and feeling that it was a missed oppotunity to get a faithful Prime on the market, and that led to my whole crusade to do these G1 illustrations to pitch to IDW and Hasbro. This version of Prime is essentially a redo of the game model, but doing it the way I felt was right. I added more curves, and changed to proportions around to bring more toon into it.

I'm interested to hear what people think of the game version, and if it even matters at all? I know I play the character all the time in the game, because the game is so much fun, and for all intents and purposes, it IS Optimus Prime. But I wonder if I'm too hyper-faithful to the origins, and am mistaken in feeling this was missed chance, and that the game skips some steps in giving fans not a true G1 representation, rather yet another 'G1-style' representation? OR, if it doesn't even matter at all, because it's not a toon shaded character?
Posted by Ken Christiansen at 7:12 AM

Thank you for always sticking to the original designs, please don't change the appearence.