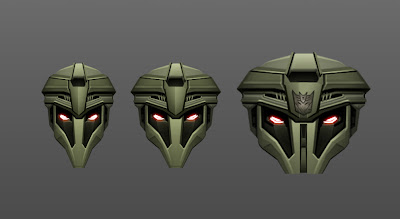 Kind of lame, huh? These where the original heads for the Combaticons. My first characters since coming back, and I was still working under the drone conceit from the first game. One of the first thoughts about these guy were that they were a team, and operated out of a hive mentality, they were different but the same, hence sharing the same simple design for the head.

If anybody remembers the first game, the characters you battled were originally meant to just get a hit of Energon, be able to transform and fight; but not be smart - or Cybertronian. But of course, by the time the movie came out, all that logic was thrown out the window. Mountain Dew, anyone?

That's why I gave them the cyclops eye...so I started with that similar conceit with the Combaticons and Protectobots, until Hasbro told us that these are considered movie-verse characters, and had us go back and revise the heads.

So this is the first pass at the new heads, a series of sketches. Although it's not dotted as the pick, I believe it's the top second, from the left. I made that head for final, and then did the same thing, squashed and stretched the same head into three different sizes for each of the characters.

But then, Luxo had me go back and do different heads for the Sniper and Warrior, keeping the new one for the Scout. You can see the picks are dotted.

And here is the final turnarounds for the new heads. Waaaaaaaaay better. I know I say us and we a lot in the explanations...but it's really me. I'm doing these designs myself, but I'm glad I was asked to do revisions for these, they were really needed. And it set a new tone for the rest of the characters following the 'teams.' 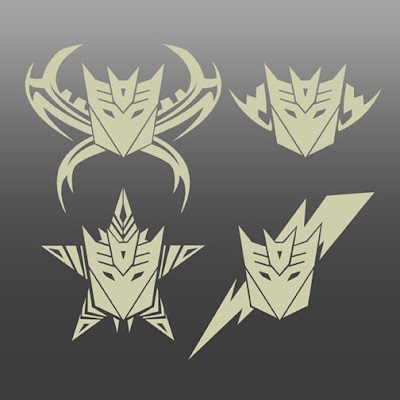 Along with the star, here's a few other ideas I tried out in the beginning, for Combaticon markings. Couple of combinations of army and Decept, and some Cyber-fied designs, based off Starscream's tats from ROTF.

And then finally, a near miss on losing the Combaticon Warrior. Since we used a Striker for the Warrior, Hasbro came back and asked us to use the Wreckage design from the first movie's toy line. The problem was (and annoyingly) they didn't mention this until AFTER we turned in the final design for approval. Weeks earlier, they approved the fact that Luxo wanted to do a Striker, and that is when they should have asked us to movie-fy Wreckage. I wouldn't have been against it, but AFTERWARDS? For my part of the budget, a lot of time and money had been spent on the Combaticon Warrior, and there was really no time to do another one. And the simple fact, he is one of my favorites I did for this game. So, the guys from Luxo and myself, had a quasi-vote, and pushed back against Hasbro, and said no. 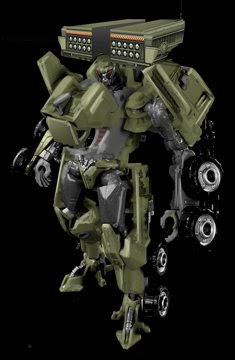 While we were waiting, though, I whipped this up as a test (I believe this is a toy shot from the awesome galleries at Seibertron.com) just to see how a repaint would look. Luxo never knew I did this, I just wanted it in my back pocket in case we had to re-do the character. Not bad, but I love my babies.

Well, we got our way, with Luxo's expert debate skills, and the Big Boy made it into the game.

Next week: Protectobots!
Posted by Ken Christiansen at 8:41 AM