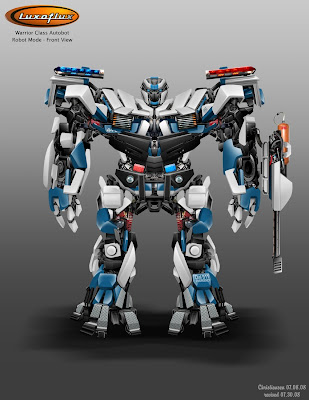 And so, here he is, Big Boy #2. Like I said, I like how this guy turned out, despite the pain in the ass growing pains of the development. And I really do give JT co-design credit on this one - I did the final art, but I would get very detailed feedback on the changes he was looking for, so we really did it together. But yeah, I think it's effective. I like the wheel placements, and the arrangement of all the siren lights... 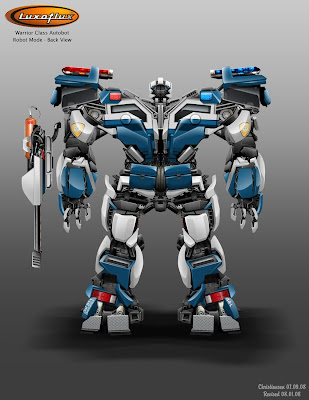 ...and the back is pretty solid too. The main thing, I think was to make him look as powerful as the Combaticon Warrior, but not just like him. I'm pretty happy with the highlight too, the idea that these were all shiny, freshly painted Protectors of the world of TF 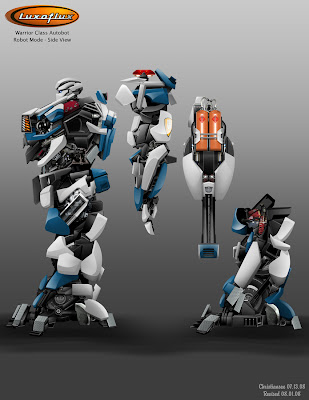 This guy is bulky - he almost doesn't fit on the page! And after revising the vehicle's flamethrower, I was happy to go back and finish the original version, used for bot mode.

Jeez, the foot saga. I probably spent an additional day just making feet revisions, here's a taste of the round and round, making these adjustment. JT wanted the back ankles to be freed up for a joint, I kinda thought it was already, but hey. And the toes...man. If anything I would have made them solid feet, ala movie Ratchet. But I got back this chop-suey-many-toe overylay back, to try and revise the feet. I did the revision, but then dropped one toe element out, because it was just too much. Usually I would turn in on average of 4 work-in-progress files, per view. A block-in, and pre-final (which is everything finished, except for additional colors and graphics, and shading) and then the final, and then maybe an addtional revision.

I did 10 versions on the front view, thanks to those feet.

I understand how some people have the opinion of that they should/could let me do what I want, but you need to understand that Luxoflux as a company, has so much invested into this game, just for their own reputation as a game maker, and a group that is be extremely reliable to create games for big franchises, like TF and Kung Fu Panda. I'm a small piece in the overall puzzle of creating a game, and I'm not even on their staff. They have system in place, and I was an outside hire through Activision, to come in and reprise my role as the character designer, while they have AWESOME artists already working there. So you know, every once and a while, we would butt heads, but it's their game, and it almost always led to a better OVERALL design.

I just wouldn't have had clawed feet on nearly every design. ;)
Posted by Ken Christiansen at 8:14 AM