When I did the first game, I submitted the grayscale concepts to Hasbro, with the caveat that these designs would change a bit as I developed them. It afforded me a little wiggle room to discover new elements as I was putting them together. The relative size and shape of the concept would stay the same, but details might be different by the time the final was turned in. For whatever reason, Luxo didn't seem to want to go that route, and so during the Combaticon development, I had to keep pretty strictly to what I had turned in as grayscale...but... 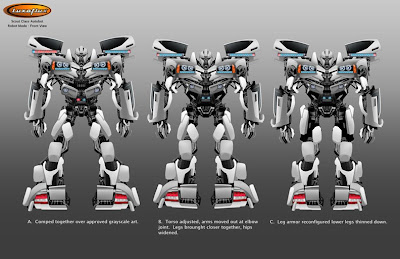 After blocking in the Scout, it seemed pretty clear that the grayscale was a starting point for this guy, not something to paint the final over. So, for pre-approvals, I sent in this; a few options, rearranging elements into a more cohesive design. (you can see I have the old headlights in there!)

So that led to the final, with a few more adjustments to the feet. Feet were a sticking point between me and JT a lot over the course of this project, for whatever reason. Well, I know...I hate claw feet for every robot in the movie-verse, and I tried to get some old school looks in there, but honestly, JT was being a good art director, and sticking to the projects' universe. I kept pointing to movie Rachet, but that only got me so far.

As far as a design, like I said yesterday, Streetwise was a consideration, but Prowl is the ultimate TF cop car. So I wanted to do an homage to Prowls' design, but I couldn't just make Prowl, due to that character being a main player in the canon. Whether or not he ever gets used in the films, there are some untouchables (Shockwave is still an unexplained miracle!)

A couple designs for the guns in there as well. The ones on the right are the originals, but Luxo had me go back and do a redesign, to fit an animation idea they had been working on. I like the originals better, and I honestly can't get close enough in the game to see if his guns transform and look like the revisions. 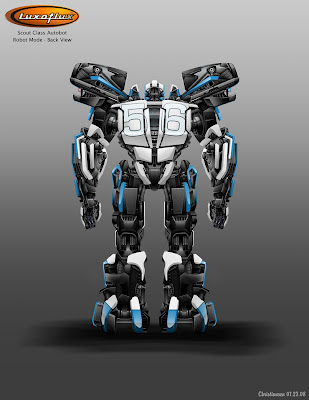 The back view. Car #56. Me, highschool football number. A little Nepo-tizz. Can you blame me? How often to do you get a chance to put in secret self-referential stuff in a AAA franchise project? And now back to the design...windshield and rear window double-stacked and hidden underneath the back panels. Another conceit used to reduce big panels of glass to a more manageable location in the design. 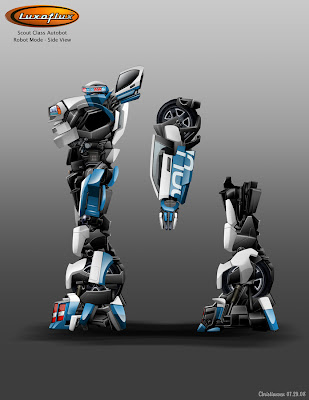 I mentioned it before, to hide the wheels, and someone asked why hide? Maybe 'hide' isn't the best descrition, it's more about placement, both logical to the transformation, and a little movie bias. I don't like chopping up the wheels, and I don't do it, if I can create space for them to be incorporated into the design. But doing 8 or so wheeled (and additionally trying to avoid the wheeled movie characters) characters, you have to make them all have different solutions where the wheels go.

Of course, I still have a few more ideas for future bots...
Posted by Ken Christiansen at 8:04 AM

Hello Ken,
Thanks for posting a colored picture of Protectorbot