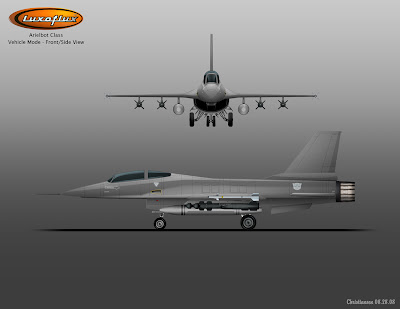 Again, a slightly modified F-16, and again, no paint job. Just posting these up, I'm getting annoyed again. I mean, there's not much to talk about without the colors, it's pretty much a straight up illustration of the jet. 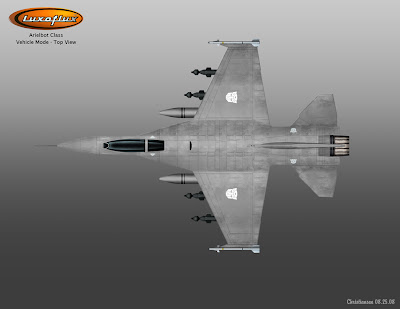 Along with the slight mod on the real world jet, I do the same for the missiles and other armaments. The Autobot symbols were temporary until I got a chance to do the paint jobs, so they got left as is. 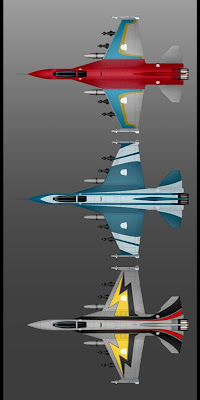 There was a break of a few hours before I was told to move on to the Stunticons, so I managed to whip these up really quick. In the design doc, it stated they wanted to try air show type paint jobs, so I did one (the middle) that was similar to one they used for reference, and then I of course did a Skydive paint job, and threw in a Fireflight one as well.

So, they're really fast, pretty much flat color over top the finished vehicle, so they're not very well integrated...but I just wanted to get SOMETHING in there to see if I could push them towards a G1 reference instead of something I thought was a little abstract, with the airshow idea.

I see in the game both G1 paint jobs made it, but I wish I was allowed to go back and re-integrate the paint jobs to fit the shape of the jet better - especially the Fireflight paint job, it's a little much in it's current state, I would have pulled more white into the red areas. Of course, I would rather have exact G1 coloring, rather than none at all!

And again, I tried to make the transformation as close to the original Skydive as possible.
Posted by Ken Christiansen at 7:55 AM