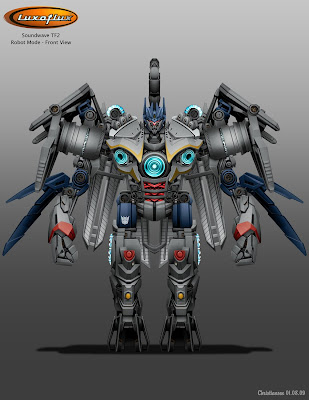 A super hi-res turnaround of the toy. There's really not much more to say...it was a lot of work to basically redraw something. And I saw in the DLC that it's not even colored like the toy, it's more traditionally G1 schemed, lot's more blue. 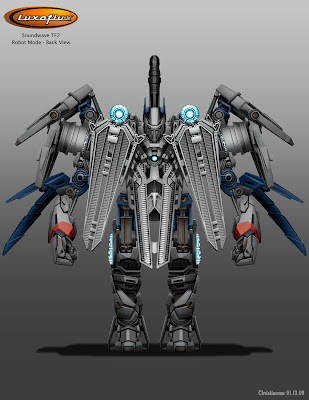 Again, I wish I had better pictures to work from, or even a prototype to work from, now that the actual figure is out, I see all the mistakes I made, stuff I missed because the details weren't clear enough... 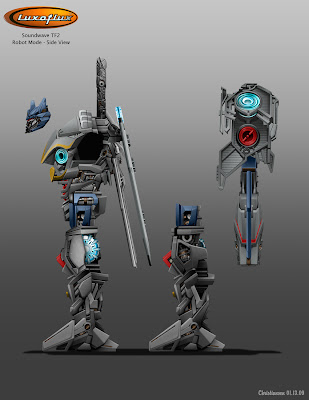 ...but along with the toy, there was an earth mode concept of Soundwave for the movie, so we added some of those proportions into this version of the character as well.

I just love all the robot designs you have posted. And I love all the design process info you post along with it.

Makes me appreciate all the hard work put into these characters.

One question though. Soundwave in the game is able to eject machines that resemble Rumble and Lazerbeak.

Did you have anything to do with that?

Keep up the good work.

I am very annoyed that no, I didn't have anything to do with it! I haven't had time to download and play the DLC yet, but I did see the trailer and shouted at my computer when I saw that little Rumble guy pop out of Soundwave...WTF!?!

That being said, that wasn't an option when they asked me back to do the DLC characters...so maybe it was something they were able to do late in the process, well after my contract closed back in the beginning of March?

Of course I want to be responsible for any/all/everything to do with characters, but Luxoflux has an excellent staff concept artist, so it was cool that he able to do some bots as well...along with those excellent keyframes that are unlockables.

Doesn't mean I'm not jealous though...;)

hey if its not to much trouble, could you put the concepts for the 2007 movie game, sorry if you already have because i have not looked that thoroughly. Also your CGI transformers work is amazing! keep up the good work

You can go to my website, www.badflip.com, to see those guys, and when I do the site update in a month or so, I'll put up the 07 game final paint jobs - right now it's just the base colors, not the paint apps that went on the figures...