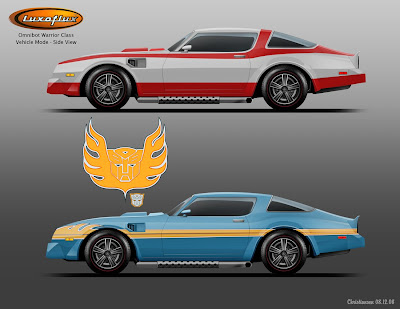 And the colors for the Trans Am. I like the white and red one a lot, but the blue one, and along with it's graphics, was tough to find. I wasn't sure what the Luxo guys wanted, and it took me awhile to get the right blue, and then the right graphics. There were a few variations on the flame theme, to match the hood... 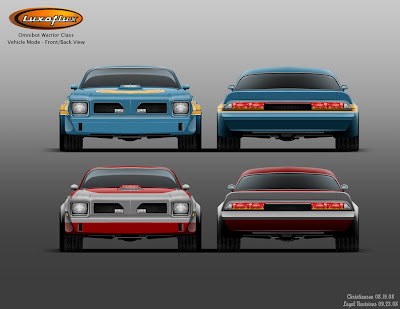 The sides were pretty well left alone, but the front and back details went through a lot of legal revisions, and by the end of it, it doesn't really seem like a cohesive design anymore. The back is probably fine, but the front just looks like chunks of details - headlight, scoop, fog light - they don't look like they belong together, or with the lines of the car.

I was also asked to add some sort of exhaust system, so I did two to chose from. Obviously the parallel pipe was the final, but I did a raked set ala the Road Warrior.

OK, this is why I hate this car. It's not so much that it's a lame car, my biggest bitch about it, is that it's so close to the Bumblebee classic Camaro, it's pointless. In the wide world of muscle cars, a Camaro, Trans Am, or Firebird is the last choice I would make, just because this TF world already has Bumblebee.

Of course, I wanted my car to be in there, but they didn't want that. Fine. Charger? Fine. Then how about another Mustang, like a Bullitt style car to go along with that Charger? Give a nod to a classic car chase? How a bout a 'Cuda, great car, not as big as the Charger, so you still get the size difference? And it's something that's not used to death. I think I even asked about t-tops, to give a nod to the Bandit. No. I know my muscle cars, and I never got a good reason one way or the other with these choices, but I'm disappointed that something cooler wasn't done. They were weak choices, in my opinion, easy Bay-esque choices, if you will.

So after that whiney-baby rant, does it even matter? You barely see the car mode in the game, and when you're fighting them it doesn't even matter what they look like, you want to cap those guys with the growling 'HEADSHOT!' exclamation, right!?!?
Posted by Ken Christiansen at 8:10 AM

Just between you and me, I would have gone for an AMC Javelin.

But I'm crazy about the Javelin, so ehn.