Whoops - I forgot to add this to the post from yesterday. Transform! 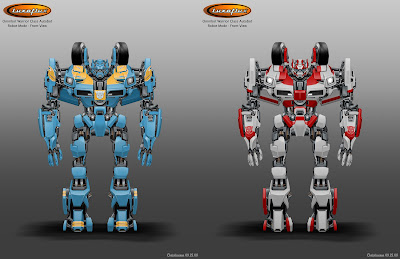 And here is the robot form. Originally I understood it to be two big guys, this one and the Charger, but later it was explained that these were supposed to be Bumblebee's lieutenants, (I say again, why the same/same of a Trans Am then!?) and one was meant to be smaller, and one bigger. So this guy is a bit more slender than BB, and quite a different body frame than his partner, the Charger.

While it's yet another car, and they all need to be very different, I still try to keep some traditional G1 stylization intact, there are a couple of different things with this guy. Namely the wheel solution, pinched together and placed on his back, slid under and back while transforming. 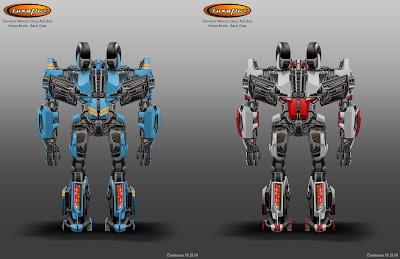 Again with the door wings - I'm going to keep doing it, as long as I can! I like the tail lights shifting vertically to make up the lower legs, and the exhaust pipes following the front wheel in the transformation, coming around to the back. 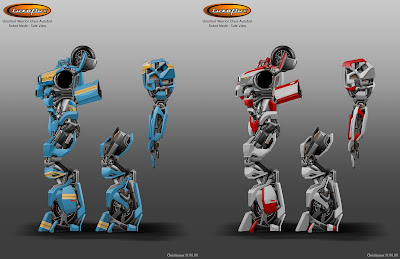 Bad Shoulders. I remember this especially being tough to reconcile the front and back view, again the danger of creating these characters in plan views, rather than an initial 3/4 view. I should have sketched out the shoulder and repainted it to work better. It's still a mess in the design conceit of the movies, but it's not seamed or segmented as it should be.
Posted by Ken Christiansen at 7:33 AM

These two remind me of nightbeat and minerva