This is a weird one...the Soundwave Movie character, but not what appears in the movie, but the toy version that's coming out in support of the movie. What? Even the Luxo guys were confused. I don't have it any more, but they gave me a few images of the toy prototype to work from, low-res and nearly useless. This was in January, months before the movie and toy were to be released, but I found better reference images on eBay! So anyways, I got to work... 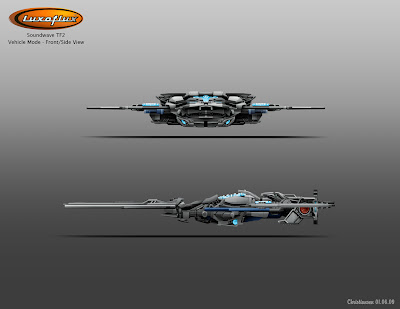 The game version was going to be pretty much the toy, so jet mode and bot mode. I tried to stay as close as I could to the toy, but slimmed down and tightened all the elements to make the jet mode a little more believable. The toy by design has to be a little clunky, so I took some liberties trying to make it 'real world.' 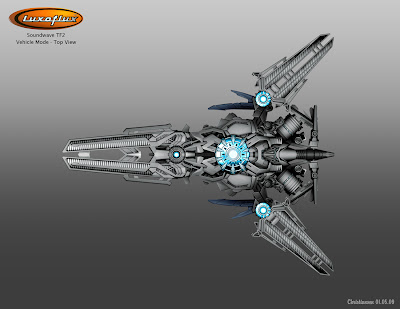 I hadn't seen any of the film yet, so I didn't know that was actually Soundwave's head placement in satellite mode, so I glossed over it when I could have done some different things for it. Either reduce it, or just make it the regular head, I don't know, maybe it works fine this way. Also, these product shots didn't have the exact position for the wings, so I kind of guessed as to where they would be. Nor did I know that was supposed to be Ravage, the black projectile that sits behind the non-head.

The elements are all insanely complex, and even though I was working from reference, and not making it up as I go, like with my characters, it took just as long to do this guy as any other.

By the way, DLC stands for Downloadable Content, if anybody is confused.
Posted by Ken Christiansen at 8:22 AM