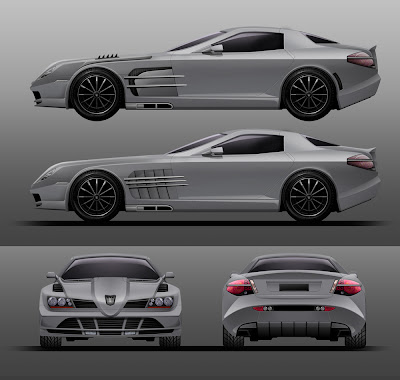 So this is the original submission for the SLR, to legal. I had already done the changes that made the other cars safe, but these super cars are just so unique, that a lot of revisions went into these before they got cleared. The Reventon took longer, but I thought it still maintained at the least the overall feel of the car, but this SLR lost a lot of swagger that those original racing images had. It kind of devolved into a variation of the stock model, which I don't think is that exciting. 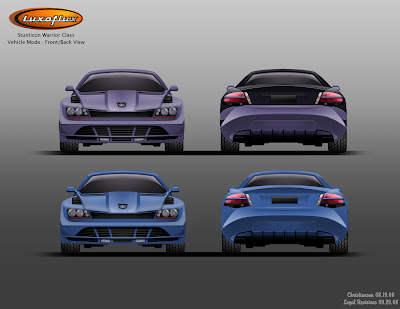 After legal approval, I took these guys to the 'paint shop' and threw down colors and graphics. The primary color being the purple, and the Luxo guys requested a blue. I wasn't actually sure what kind of blue they meant and I just did this color as a test - here's a starting point, darker, lighter, more or less saturated - but they went for this one. I thought it was a little over the top, but in the levels in which they appear are the super dark and saturated Shanghai city maps, and that color looks pretty good against the backround. 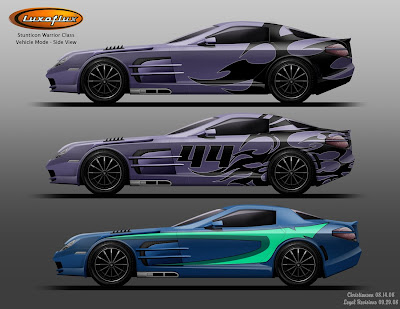 The top purple is the game version. The one below it, is the first, along with that idea of the numbering system ( 44 for my HSBFF) the graphics were just too much to even show up in the game. So that's why they got scaled back a bit for the resubmission.

And the over-saturated green stripe over the blue in the repaint version. Something nice and sharp and pointy.

The transformation process, again, as traditional as possible, but since I moved around some vehicle cues, it's still fairly different from the other cars in the game.
Posted by Ken Christiansen at 8:21 AM