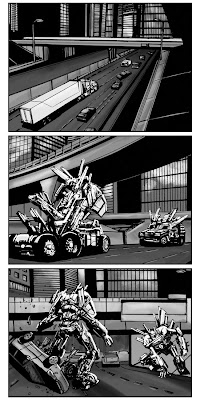 Continuing with the memory-boards, these are based on the scene they had in rough animation, showing Prime rolling down the freeway, and facing off with another Decepticon. Again, all from memory, and based on in-progress character designs...I think that must be Barricade, who was called Brawl at the time. 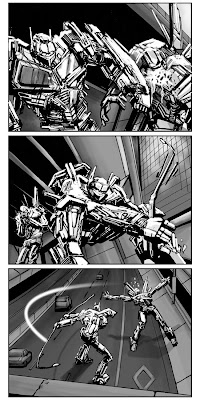 When we were there, the production had shown us what they wanted Prime to be for final, and an artist at Hasbro did an overlay adding in the windshield chest, and spires on the helmet, and a couple of other G1 cues, asking if they could rework the final to make it more like the source - and while I thought that looked awesome, the production designer was all pissy about it, but it looked really good. In the end, what we got was a 50/50 compromise between what Bay wanted, and what Hasbro requested. SO close. Anyways, I semi-based the Prime in this set to look like the Hasbro image...

Hopefully you folks can tell that this turned into the Prime vs. Bonecrusher fight that kicked off the finale; in my opinion, by far the best action sequene of the film. Because it had a beginning, middle, and an end. Go figure. 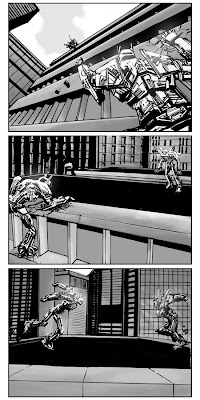 And this is just a clip of a building top fight, mostly to show that the game would have an all roam environment that went from street to rooftop. This must be Prime/Megatron duking it out, but the animatics we had just been shown had two generic robots fighting it out, working out the camera moves. 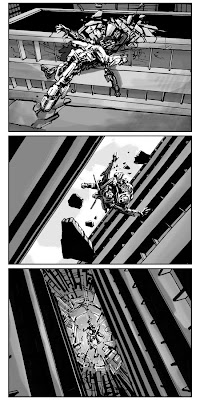 I think I just added helmet spikes to insinuate that it was Prime, you can see the fall between the buildings down to the street was kept in the movie.

It was pretty cool from a technical standpoint, to see the rough animations turn into the final frames, how that process was worked out from start to finish.
Posted by Ken Christiansen at 9:05 AM