So soon after the script session, we all went down to the offices of the Production Designer, who I wanted to punch in the face after about ten minutes of listening tell us how dumb the original Transformers were. I don't know if he was over-compensating in protecting his director's vision, or if he was just clueless - statements like 'if you could be anything, why would you be a truck? That's so lame, you'd get your ass kicked by the jets!' Obviously the guy didn't immerse himself in the lore, and just pointed out a problem with the movie script.

If anybody has the TF-Movie special editions, you can see him continue to mock the source material. I have lots to say, (I won't) but the movies really speak for themselves, whether you like them or not; but I will say, ILM shored up all the concepts and made them way better. And that's not a quip against Ben Procter, (the Lead Designer) who is really a master artist. I hate when people rail against the designs of the movies, and the concept artists get thrown in the mix...if you hate the movie versions or not - either way the artwork is incredible...but we all have to answer to somebody who is driving the vision, and you have to do the best you can in creating the art. 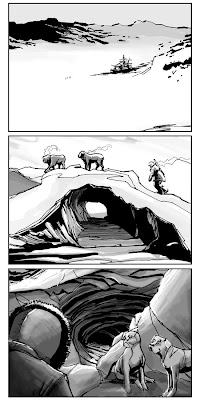 We were shown a ton of animatics, and afterwards I was asked to recreate these scenes from memory, coupled with the notes/thumbnails I was able to pull out of the script. The discovery of the Ice Man Megatron was originally the opening of the movie, and we were playing with the idea of opening the game with a Megatron level, flying through space debris, and eventually crashing on Earth, in search of the Energon Cube. 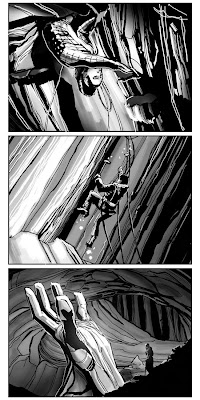 And these were meant to be the following cut scenes leading into the next level in movie continuity... 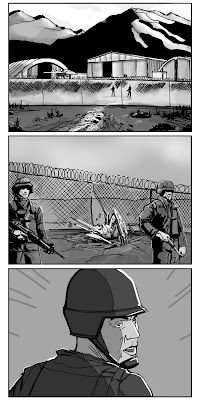 ...which was the Qatar scene. This was a more stealthy infiltration, with Skorpnok sneaking in and then creating mayhem. 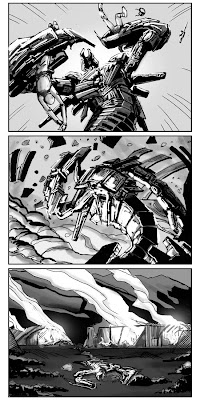 After the destruction, he sneaks off, and then the Blackout (still called Vortex) level would begin.
Posted by Ken Christiansen at 8:45 AM

I very like the pic with the hand of Megatron ! :o