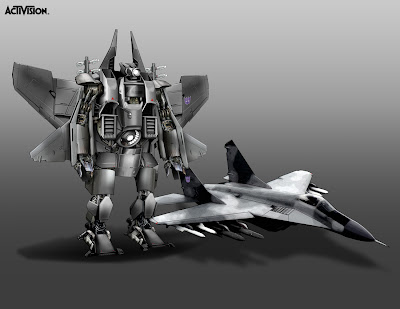 And so here is the final render. Meh. I think he's a pretty good design, but posed and proportion incorrectly - he just doesn't look badass enough. He's supposed to be able to hang with the movie Starscream, but I get the impression ol' Screamer wouldn't take but two seconds to dismantle this jet drone down to his landing gear. 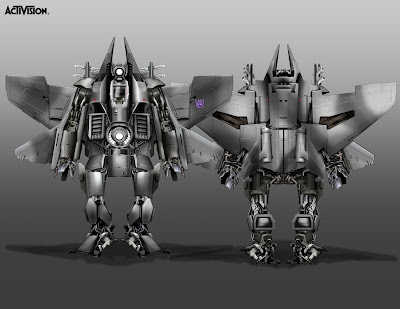 These views don't help him out either, it gives the impression that he's very flat back, which wasn't really the intention, but I can see how it was interpreted that way. I did want to stay in the family of Starscream, but again, we were behind on getting the concepts, and at this point, all I had of Starscream was a rendered pencil drawing. Which in the end, stayed fairly close, but I probably ended up emphasizing the wrong things before seeing the final. And again, I now had this less-advanced-than-the-movie drone style established, so I needed to keep that consistant as well.

You know I'm proud of all my babies, but like I said, I'm glad I got a second chance at doing jets with the Seekers and Arielbots from the RotF game. 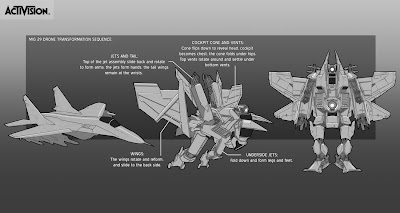 Of course I knew how these characters were breaking up in their transformations, and I thought the A to B transition in the illustrations were enough, but Travelers put in a request for me to show a transformation sequence to help them with the animation. So I basically chose a 50% stage, and highlighted in text the specific movements. Meet Dreadwing, the jet drone toy. Despite my misgivings about the design work that I did, this is actually a great little action figure. He's really econonomical in his transformation, and doesn't have little bits that fall off as you transform him, and you can get pretty good poses out of him. Again, I bow down to the engineer who had to make this guy into plastic...
Posted by Ken Christiansen at 7:20 AM

I do have a fondness for this mold, but I prefer 'Overcast' his movie 1 repaint, just for having better colors then the weird sky camo they gave him.