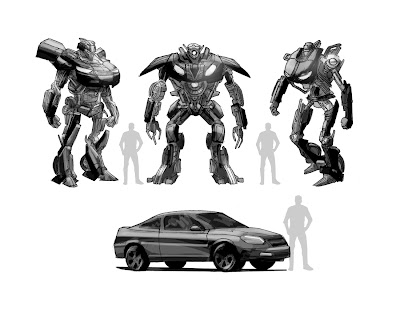 AKA Swindle, as he's known to the public! He is mostly a reaction against what they had going for the robot designs, in particular Bumblebee and Jazz - remember those guys were still in development, and had a serious lack of vehicle cues on their robot forms. So my main goal was to have wing doors, and a headlight/hood chest, on MY car-based Transformers. 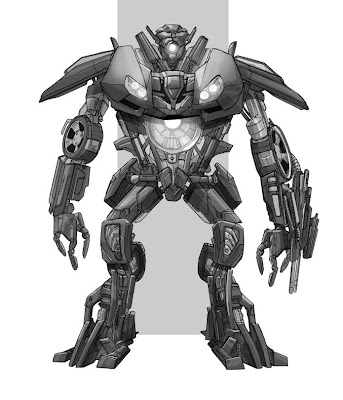 The conceit being that these were drones, and relatively mindless; this was the reason behind the cyclopian eye, intending to give the impression that they were single-minded in causing trouble for the player.

Now this was based on the animatic and description we were given. Unfortunately, we weren't familiar with 'BayLogic' and by the time the movie came out, they just made the Energon created characters as full on as the main characters...whatever.

And so this is what was sent off to Hasbro for the intended design, they liked it a lot, and I went ahead and got started on the final. 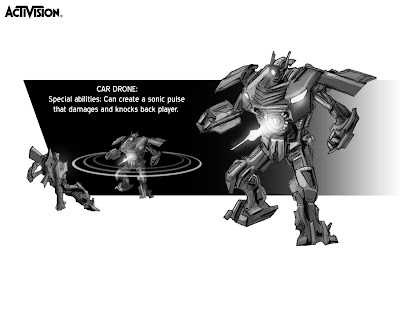 This was a game play idea that existed at the time of the roughing out phase of this character, but I don't think this actual art was created until all the characters had been modeled, and the animations were starting - I basically threw together a basic move for each guy to send off to England, to see if Traveler's Tales could fit it in. I think in the actual game, he was given like a side step move, that made it tougher to track him with the player weapon.
Posted by Ken Christiansen at 9:32 AM