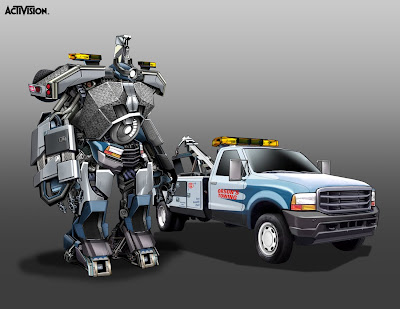 I like this guy a lot, he came out pretty rough and tumble, the diamond plate armor came across really well. The truck is based on an F250, with a fairly standard tow rig on the back. Originally green with the yellow lights, he was submitted blue. And then when the graphics for the movie tow truck were done, Hasbro wanted us to re-deco it to match. The flow of the elements came out great I thought, this is one of the characters where I hit my stride, in this particular set of design rules. I tried to use as many real car parts as possible, not trying to rely on reforming parts too much, more of a recombination of elements. I was hoping this was going to match up to the movie stuff, but still was only getting peeks at the final ILM models at this point. Anyways, I thought it was cool, and in the end it probably matches the movie-verse the best, of the all the drone characters.

Apparently so much so, that the Man himself, Steven Spielberg commented that he wished they put this guy in the movie, while sitting through a game presentation from Activision. Both the main producers I worked with called me afterwards to tell me about it, and I just about died. That's really one the greatest moments in my professional life! I mean I have a framed Jaws poster in my office, how more of a fan could I be!?! 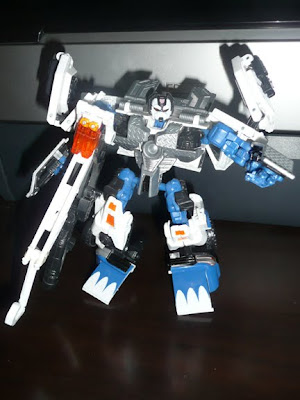 Meet Longarm, the toy version of this guy. He's great.
Posted by Ken Christiansen at 7:19 AM

Alex Kubalsky did the engineering for the Longarm toy, and the reason why it looks so different to your final design was he didn't receive reference images from Activision in time, so he more or less just made it up, based on G1 Hoist. When the reference material did finally come, he incorporated some elements into the toy.

My nephew has that toy and I would never you designed the character!