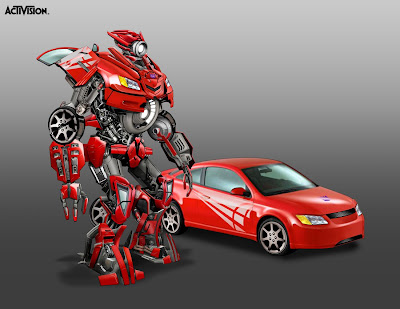 And here is the final for the car drone. In addition to the single eye, I placed a central power source, that and the eye would be a shared characteristic to show the player that these were drones. Now it seems pretty unnecessary, but at the time we didn't have clearance to use any other characters in the Transformers Universe (we'll talk about Shockwave later) and really, we still didn't know what the movie characters would end up looking like. So this was the best effort to create characters for the movie-verse, without really knowing how they'll match up in the end. We also didn't know how the GM deal was worked out - turned out it was for movie only, but I had already played it safe, and used a Chevy Colbalt for the base, later having to go back and change details for legal. I am not a Chevy fan, nor do I think a Colbalt is a cool car. We wanted something to invoke maybe a more (albeit CHEAP) import car within the product range of GM at the time...but, if it was me, GM would have been the last company I would have gone exclusive with. Especially at the time, they were way behind the crest of the tide in car design. They basically had the concept car that turned into a Camaro/Bumblebee, and some cool trucks. Lucky the Mustang/Barricade snuck in there... 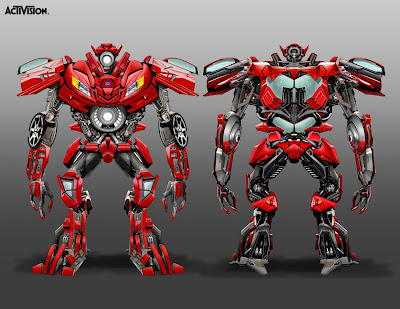 He's almost 'quaint' to me, looking back at him now. I want to pat him on the head, and say 'good try.' I took the Production's design philosphy, and went my own way with it. For what he is, it came out pretty well, and now from an art director standpoint, I wouldn't say it fits in the movie-verse for the first movie, but I still think it looks more like a Transformer than Ironhide and Ratchet from the movie. Anyways, Hasbro absolutely freaked out on it, and said we could do more. 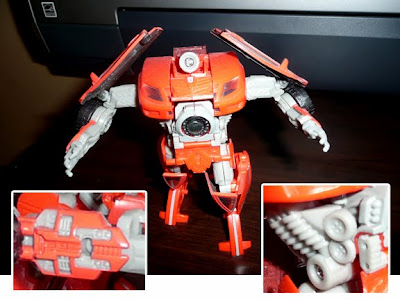 Little did I know that they were planning on making a toy out of it...I got a call from the producer - "are you sitting down? I'm going to blow your mind!" What an honor, 20 years of fandom culminating into a character I designed turning into an actual action figure. On a card, hanging on the pegs in a toy store. Not only that, but they put this character in all the press kits for the movie, so he got used has a promotion tool for both the movie and the game. Pretty awesome. What really blew me away is the attention to detail, the extra effort to create the details into the forearms and ribs/waist from my artwork -it really touched me. I still haven't met the actual engineer who did the sculpt and tooling for this guy, but I will bow down when I meet him or her.
Posted by Ken Christiansen at 8:24 AM