And now for some Protectobots! 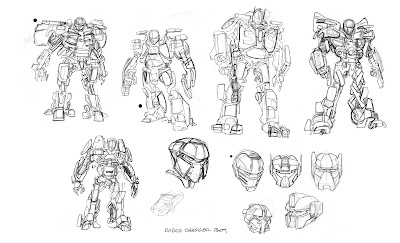 Starting out with a police car, we needed an Autobot mirror of the Combaticon Scout, another mid-sized vehicle. It made my life a little easier, since I already had a body type defined, this character was mostly about finding ways to reconfigure the vehicle cues into bot form. I also toyed with the idea that he'd be a two gun sheriff type, taking advantage of the police origins. 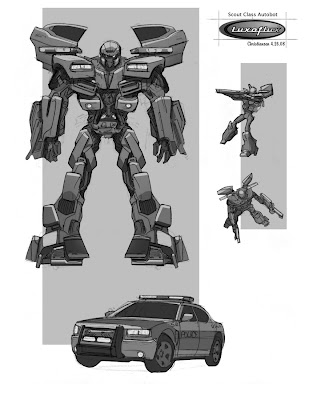 The Luxo guys chose the new Charger to be the cop car, which was convenient, because I was living in Glendale at the time, and all the new police cars were Chargers! So my influences were from that, and some aspects of Barricade.

So I slapped some gray tone on the refined drawings, (and some little character sketches) and sent it off to the big H for approval...
Posted by Ken Christiansen at 4:01 PM

Hello again, (i posted about being a fan of your designs and wishing you luck with IDW the other day)

I thought that the Charger police car had a really nice look to him, any chance you could post the character sketch in color?

They made Protectobot playable in the game (in multiplayer), he is a tough little gun slinger.