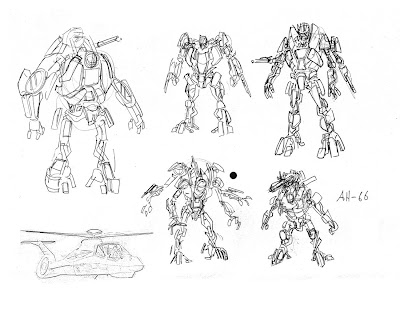 Some sketches for the Combaticon Sniper. Now, I knew he was supposed to be more slender, but some of these are to be intended to show a larger frame, but with much negative space to give the illusion of size. But, we just pared it down to the original idea, and went skinny. 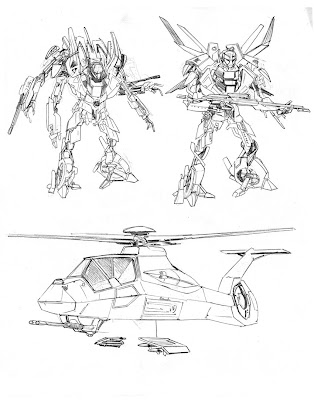 I've been wanting to do a four armed TF for a awhile, (since I felt I had missed an opportunity with the cement truck from the first game) and tried to get Luxo to go with the idea. They didn't feel it quite fit with what they wanted, not to mention a lot of unique additional animation they probably couldn't justify into their budget. 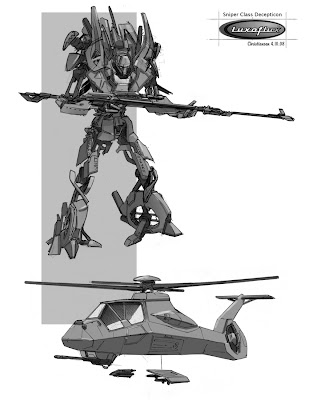 Here's the drawing that went off to Hasbro for approval...bot and vehicle, a modified Comanche helicopter. The sniper rifle was about 2/3 the size originally, but the Luxo guys kept saying, 'Longer...just a little longer...' so he's now saddled with the long shot.
Posted by Ken Christiansen at 8:05 AM

I hope you don't mind, but I am saving copies of all your design pics for reference and design inspiration.

I'm no great artist, as you are, but I love working on character and mechanical designs for the literary ideas I have (I can write rather damned well, but describing complex things is harder than just doing a drawing of it in many cases)